Liz here, going for the low-hanging fruit. Apple bottom jeans and BOOTS WITH THE FUR.

Next week, I’ll have an in-depth expose for you (I’m doing some crazy research into a little-known, evil industry that steals your data)…but this week is all about BEAR MARKET BUCKS ™.

This headline is all you need.

So let’s go get the money.

I’ve earned the right to short ARKK. While LAME STREAM MEDIA is just now, in May, catching onto the fact that the tech bubble is BLEH…

I was shorting Zoom fatigue and NFLX exhaustion in January…. and way back in December, PTON disgust. We’ve made mega bucks on all of those (actually, you just took off some NFLX profits yesterday, so congrats.)

In fact, back when I was first shorting Zoom, the second-largest ARKK holding, I believe I said this…

“Cathie Wood of ARK Invest, the almost comically unsuccessful tech ETF whose thesis can be summed up as ‘If we own this, sell it,’ recently bought $130 million of ZM.”

For some reason I had a brain fart and said ARK Invest instead of ARK Innovation (I believe this was in the very early days of pregnancy), but you know what I mean.

Cathie is a great short indicator, and her vote of confidence in ZM was the final straw for me in my research. I immediately shorted it and made $$.

In case you want a closer look at ARKK, which maybe should be called TITANICC, be my guest. 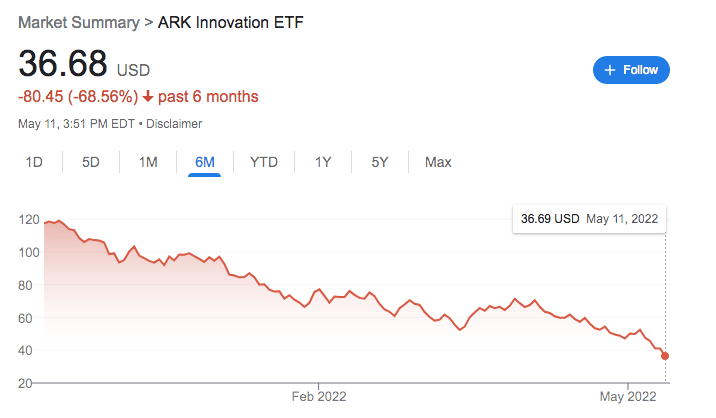 If you want to know why ARKK is sinking, peep the NASDAQ (tech bubble!) vs. consumer staples and utilities (toilet paper!) 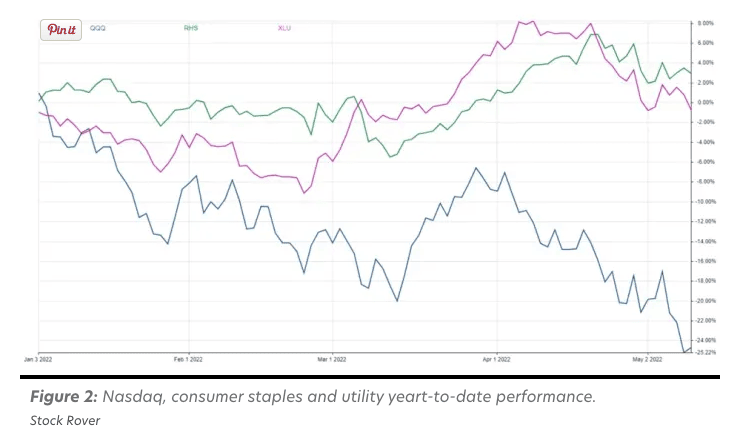 Cathie’s also long SPOT (unofficial BLEH from last week) and DKNG (CJ just cleaned up with some puts on them) and so many more. It’s too easy. I could pick one stock off her list and be set for “BLEH” for the next 15 weeks.

In case you weren’t convinced to pick up some ARKK puts right TF now…let me share my secret BLEH weapon with you. I call it the “Jade Face Roller Indicator,” or the JFR for short.

Aeons ago, in another lifetime, I worked with an expert I’ll call Crispin. This is the only information you’ll get about him, so do your worst.

The main thing I remember about Crispin is that I once shared an elevator with him and he never spoke or moved. He was delicately holding a jade face roller and rolling it on his face. I have never seen a man do this before, and never wish to see it again.

In addition to the JFR, Crispin has an uncanny talent. Similar to Cathie Wood’s, actually. Whenever he goes long, the thing he recommends usually sucks. (For instance, he was long PTON, and we all know how that ended.)

I still get Crispin’s emails, and recently, he bought calls on ARKK. They expired at 0.

So he bought more.

I call this the double JFR indicator – a powerful confirmation.

Let’s do the exact opposite, shall we?

I’m writing this after close on Wednesday, and I’ve got some July 15 puts that are moving – but not too expensive (yet).

I’ll build in some wiggle room, and if we don’t get filled tomorrow I’ll send you out another alert pronto.

As I’m writing, by the way, our NFLX puts have closed up at 92 cents – nearly a double from where we got in at $0.50. I’ll probably take off a quarter and leave the last bit for F.U. money (Mark would be proud).

By the way, I bear no ill will towards either Cathie or Crispin. I’m sure they’re lovely people, but I like all y’all more.