Liz here, not being political! I love masks.

How could I not, when this study has been done?

Spoiler alert: it’s because, with a mask on, people can’t see your UGLY FACE.

(Remind me to tell you about this absolutely awful Reddit cesspool I discovered, called “Roast Me,” where people literally put up pictures of their faces and ask to be insulted. Why??)

Be that as it may, mask mandates countrywide are lifting and PPE manufacturer stocks are, well, not looking so hot.

WHO IS THAT MASKED MAN?

While going to see my tax lady at East Point Mall, I discovered that some enterprising little child had drawn the mark of Zorro on the bathroom wall. Who was that masked man? We may never know.

(That headline is from the NYT, which you should immediately be able to tell from the font.) They interviewed a sad American entrepreneur called Paul Hickey, who helped found PuraVita Medical to make KN95 respirators:

“But as soon as the waves crested, and Chinese companies, determined to regain their market share, began exporting masks below cost, the customers disappeared. ‘All the hospitals and government agencies and retailers that had been begging for American products suddenly said, ‘We’re good,’ said Mr. Hickey.”

I can only imagine what the Reddit trolls would do to someone with a name like Mr. Hickey. One of the worst roasts I saw on “Roast Me” was an unassuming little man who posted, “I just became a father today, and I feel great! Roast me.”

A troll promptly responded with these horrible words:

“If you think the kid looks like you, you’re looking at the wrong hole.”

Anyway, in general, with mask restrictions lifting throughout states and the few holdouts – like airplanes and public transit – causing rioting and headaches, what the Financial Times calls “face-covering fatigue” has begun to set in:

“Twenty-one US states that have Republican attorneys-general last month sued the federal government to overturn the (airplane mask) mandate, arguing that it had exceeded its authority. A group of 17 Republican members of Congress filed a separate, similar lawsuit. Face-covering fatigue also appears to be setting in in Democrat-led big cities: mask compliance on the New York City subway has fallen to a new low of 83 per cent, with only 70 per cent wearing a mask correctly, according to New York’s Metropolitan Transportation Authority.”

Last year, if you’re curious, fully 72 percent of “unruly passengers” on U.S. airplanes were unruly because they wished to take off their mask and instantly lower their hotness quotient. Were you one of them? I won’t tell.

Think about it – if Zorro takes you out to dinner, that is literally a mask man-date. OK, I’ll stop.

A lot of small mask companies – which started out the pandemic full of patriotic vim and vigor – have shuttered entirely, or drastically reduced their output. The “American Mask Manufacturer’s Association,” a Fellowship-of-the-Ring style group of mask artisans, is dwindling rapidly and selling off their production equipment (often purchased by government grants to begin with).

ABC News interviewed a number of these out-of-work mask makers, who often seemed more bewildered than angry. I’ll just put the whole quote in this box:

These are all the smaller mask companies, of course – but what about big, publicly-traded ones? (Spoiler alert, those are the ones we’re interested in.)

Well – obviously they don’t make just PPE, but the PPE business hurts them. Even Seeking Alpha, which routinely categorizes stocks as “deep value” that I would categorize as “came out of the wrong hole,” acknowledges that the PPE biz is a headwind for one of the ones we’re looking at today.

Oh, did I mention that the U.S. transit mask mandate – originally slated to expire on April 18 – has been extended till May 3, and after that, masks will only be required in random pockets here and there, such as some jails?

As we move into the summer, PPE is not going to be a viable business for anyone, large or small.

Forbes has a very interesting hot take on masks in jails, by the way. 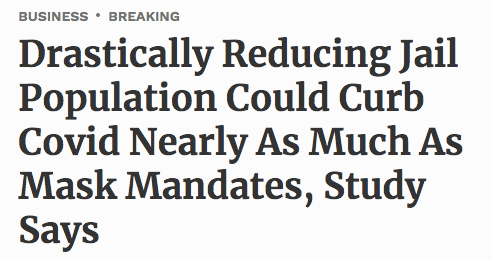 Now, would letting out all the inmates cause other problems, perhaps? I don’t know. Ask Hartley the Possessed Man.

Two-Faced Snake In The Grass

I want to keep an eye on a couple of large industrial companies that, right now, make a lot of PPE equipment in addition to other things. It’s a two-fer! Let’s pick up some short-term puts on Honeywell International Inc (NASDAQ: HON) and 3M Co (NYSE: MMM).

To be clear, I don’t think these are long-term shorts – Honeywell is in aerospace, for Pete’s sake.

But the PPE specter (euphemistically called the “Safety and Productivity Solutions” section of the business) has been dragging the overall ship down a little bit lately, and I think we’ll see a continued drag in May when the masks come off on planes, trains, and automobiles worldwide.

“Honeywell’s revenue of $8.7 billion was down 3% y-o-y, and it compares with our forecast of $8.9 billion and the consensus estimate of $8.7 billion. Looking at individual segments, Performance Materials & Technologies saw its sales grow in low single-digits. In contrast, Aerospace and Building Technologies, both segments, saw a low single-digit decline in sales. The Safety & Productivity Solutions segment saw a low double-digit decline in sales, owing to the reduced demand for PPE kits.”

In particular – and this is so silly I just want to rag on them for a minute – at the height of pandemic enthusiasm, Honeywell collaborated with singer will.i.am to produce…this. 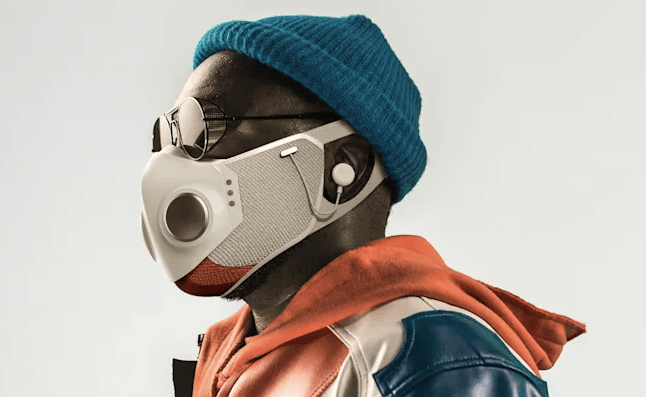 This is the XUPERMASK, a $299 Bluetooth-enabled monstrosity that comes with LED day glow lights, dual three-speed fans and HEPA filters. 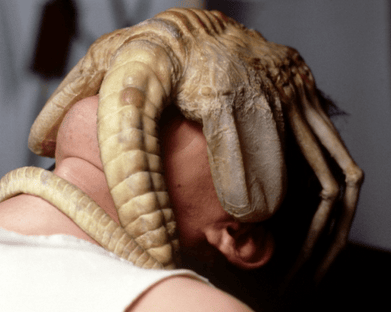 Will.i.am explained to the New York Times, “”[The pandemic] is straight out of a friggin’ movie. But we are wearing masks from yesterday’s movie. So I wanted to make a mask to fit the era that we’re in.”

Anyway, HON hasn’t looked so hot over the past 6 months (surely, nothing to do with this)…and if you’ll notice, they’ve revisited the $182 level several times. What do you bet they’ll go back there? 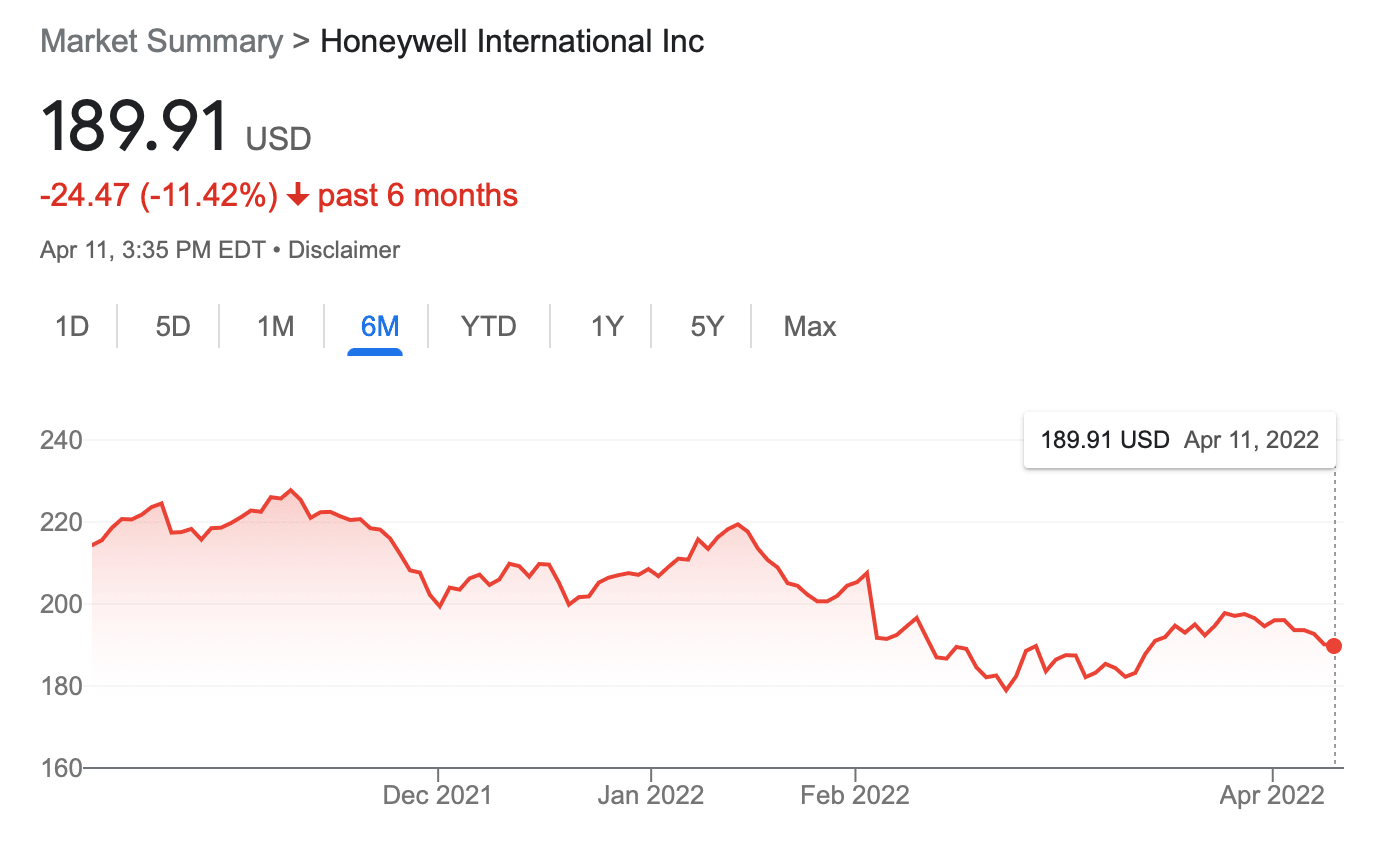 Puts around that level are expensive, so we are going to go a little more OTM. This gives us a chance to get through a month or so of the MASK-FREE AIRPLANE WORLD.

And then for good measure, let’s throw on some puts on MMM, an N95 manufacturer with a similar stock story, who have also had the brilliant idea to increase all their prices this year (something customers historically love). Per Seeking Alpha: “The company is taking pricing action in order to counter inflation and its pricing increased 0.1% Y/Y in Q2 21, 1.4% Y/Y in Q3 21, and 2.6% Y/Y in Q4 21. This increase is expected to continue in FY2022.”

Notice how that is inversely correlated with the stock movement. 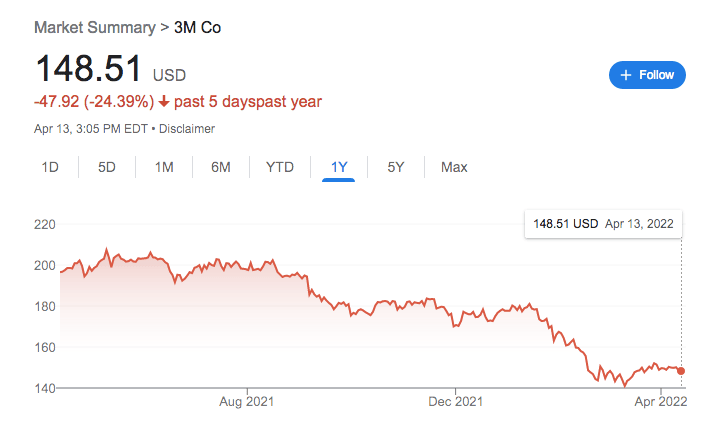 They’ve hit $140 and bounced off it, so let’s send them back whence they came.

(By the way, I have a great trick that I use to win when I am bowling against my husband. When his back is turned, I crackle my fingers at him and create imaginary static. I truly think this messes up his concentration, as it has caused him to lose a number of games. Feel free to incorporate this into your own trading arsenal.)