Liz here, with a simple question.

Would you pay $590 million for this drawing of a pop tart cat? 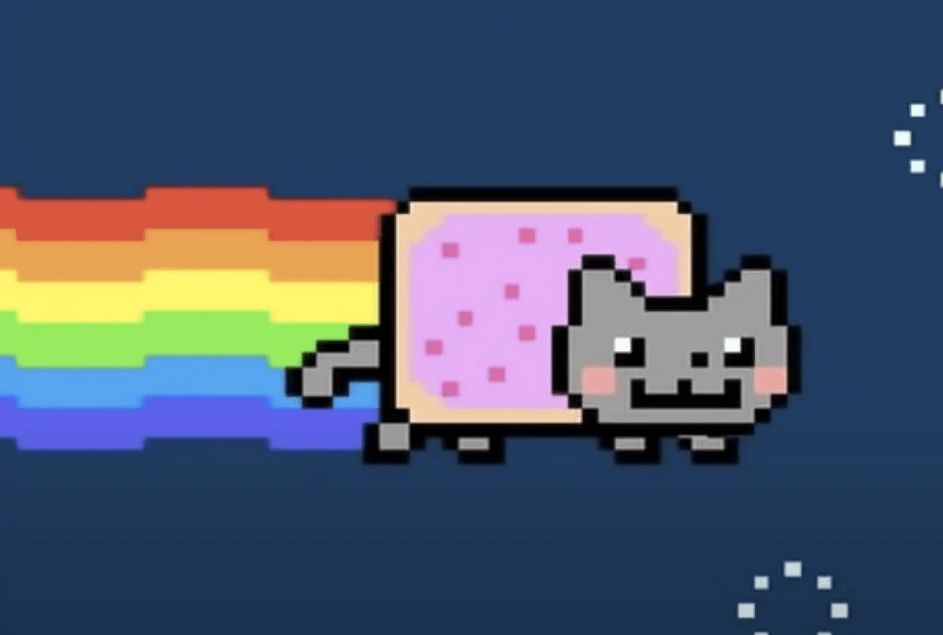 If you – like most sensible Americans – would not, then come short the obscene NFT bubble with me.

In case you needed extra incentive to go short, just read these 15 words.

Are you ready to take a stand for sanity? Let’s go.

NFTs Are Everything That Is Wrong With The World Right Now

First of all, don’t come at me. I didn’t say crypto! We have great crypto experts, and Tom is at the forefront. Check him out.

But NFTs are not crypto. They are decadent folly and madness, the kind of excess that sunk the Roman empire. I was a kid at the height of the Beanie Baby craze, and have I and my friends ever reaped one red cent from our “rare” Beanie Babies? WE HAVE NOT.

NFTs aren’t crypto, because they are not money. That’s what the “NF” stands for non-fungible. One Bitcoin can be substituted for any other Bitcoin (the way all money works), but NFTs can’t be “traded or exchanged at equivalency.”

When the New York Times is writing headlines like this, you know something is deeply, crawlingly wrong with the fabric of the universe.

Why did pop tart cat (his proper name is Nyan Cat, and he was created by an internet artist called Chris Torres) sell for $590k? Because some goon thought it was artwork and was worth that much. That’s it. That’s the reason.

NFTs can be anything. A meme. A weird little cartoon. A tweet. (A NFT of the first-ever Tweet sold for $2.5m).

Whatever it is, it doesn’t exist in the real world, except as pixels.

Literally, the only thing unique about an NFT is that it’s one-of-a-kind. Anyone can own a copy of the “art,” but there is only one digital token that is the True Pop Tart Cat. And some sucker just bought that little snippet of code for the price of my parents’ wooded mansion in rural South Carolina.

According to The Verge, “Buyers typically get limited rights to display the digital artwork they represent, but in many ways, they’re just buying bragging rights and an asset they may be able to resell later.”

All the ownership records for NFTs are stored on the blockchain, which causes its own separate set of issues (more on that in just a moment).

Essentially, these are imaginary assets being sold for eye-poppingly real prices. You still with me?

Before I move on to the actual problems with NFT – beyond the mind-numbing idiocy of them – let me share with you the wise words of digital artist Beeple (surprisingly, not his real name), who sold an NFT at Christie’s prestigious auction house for $69 million dollars.

This was it; this was the $69 million digital collage, which doesn’t exist in the real world except as a string of code. 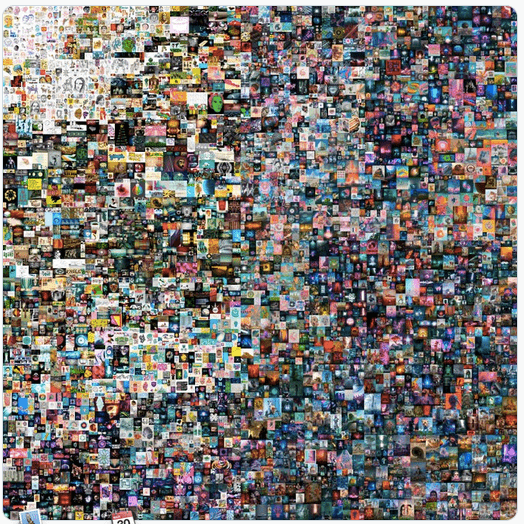 “I actually do think there will be a bubble, to be quite honest,” he said (one day before his record-breaking sale). “And I think we could be in that bubble right now.”

In the same article, the BBC interviewed David Gerard, author of Attack of the 50-Foot Blockchain, which looks good. He called people like Beeple “crypto-grifters” and said they’re “(t)he same guys who’ve always been at it, trying to come up with a new form of worthless magic bean that they can sell for money.”

As for the Christie’s auctioneer guy, who I’m sure made a cut of the $69m (I’m not sure how these things work), he himself said that NFTs “made no sense…the idea of buying something which isn’t there is just strange.”

Yesterday, upon the stair,
I met a man who wasn’t there
He wasn’t there again today
I wish, I wish he’d go away…

For starters, these frivolous and mostly imaginary digital assets take an insane amount of real-world resources to produce.

The blockchain, where NFTs are hosted, is incredibly energy-hungry. In order to validate the tokens (don’t ask), there’s an electricity-guzzling protocol called “Proof of Work,” which uses enough electricity to power an average U.S. household for 9.5 days…to mint ONE NFT.

Would you sit in the dark for 9 days in order to get this? I would not. 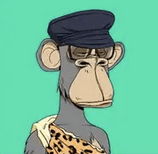 If you’re curious about carbon dioxide, according to Investopedia, each NFT transaction on the Ethereum network “emits almost 150 kilograms of carbon dioxide, equivalent to 331,056 Visa transactions or 24,895 hours of watching YouTube.” I actually didn’t know YouTube generated carbon dioxide, so there’s me educated for the day, then.

Here are the recent terawatt hours for the Ethereum blockchain (where most NFTs live), per Statista: 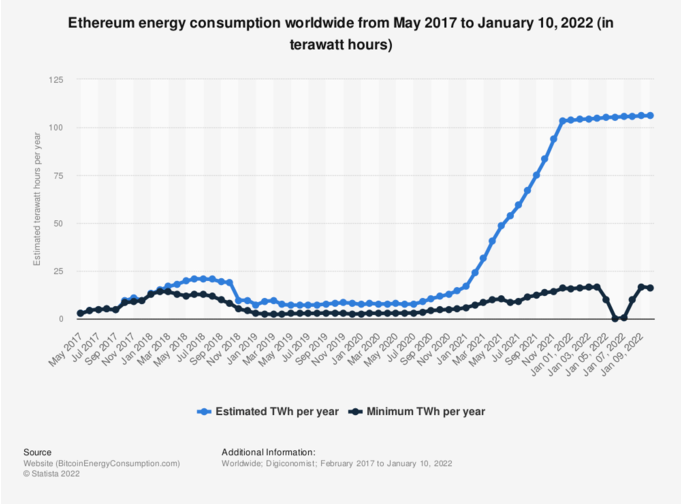 There’s a much more energy-efficient protocol in the works called “proof of stake,” as opposed to “proof of work,” but the rollout keeps getting delayed and now everyone vaguely hopes to see it by this summer. I’m not holding my breath.

Oh, and don’t forget the increasing wave of copyright lawsuits that are just getting off the ground as NFTs spawn ever more complex intellectual property issues, either.

And the fraud and scams and money laundering (the Department of Justice just made the first official NFT-related arrests last week).

And the fact that if the server goes down, your certificate of ownership (and thus, your entire investment) just disappears POOF.

And for what? Something that How-To Geek describes as “buying the deed for a house but not the house itself-and you paid the same for the deed as for the house.”

Right now, we’re reaching an inflection point where the whole NFT caper is about to collapse under the weight of its own idiocy. As Roger Ebert once said about a movie villain who could only achieve sexual satisfaction by embedding hooks in his skin and hanging from the ceiling, his “libido needs such complicated tending it hardly seems worth the trouble.”

It’s becoming clearer and clearer that NFTs as a … thing? Concept? Entity? are not sustainable, particularly as we’re all increasingly concerned about real things, you know, like gas prices and war.

Tammy Parker, a principal analyst at GlobalData, puts it nicely…

“This type of collectible craze comes around every generation, fuelled by buying mania before the market stabilizes and either goes away entirely or sticks around in less frenetic form. Similarly, some skyrocketing NFT prices reflect the tulipmania bubble in the 17th century when Dutch investors went wild buying tulips, pushing prices into the stratosphere before they crashed back to earth. Likewise, many NFTs have already lost value since being minted.”

I think that peak tulip moment struck in January 2022, when NFT sales hit a $7 million all time high. Then, suddenly, something…happened. 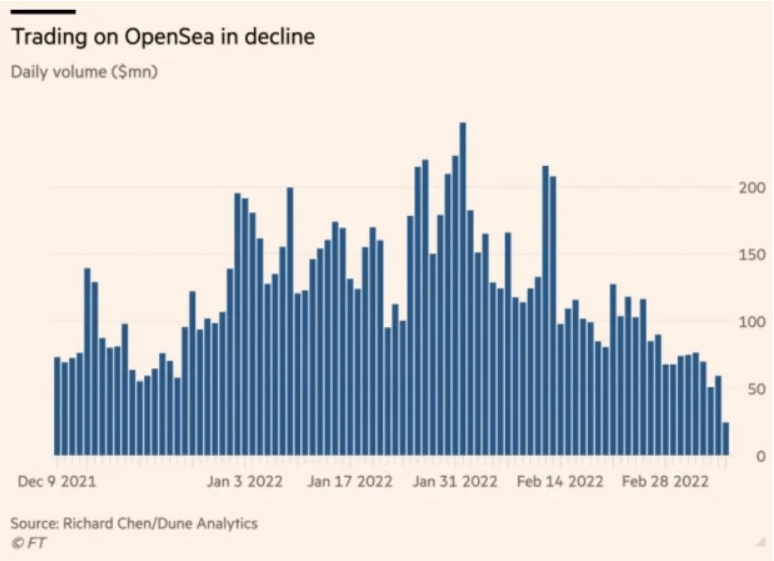 People abruptly lost interest. This is Google searches for “NFT.”

I can confirm this with my own autofill, which, based on what people are searching for along with NFT, is highly uncomplimentary right now. 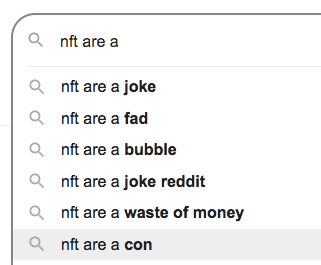 Not very long ago, NFTs had a total market cap of $23 billion (bigger than CarMax). Now, it’s down to $10 billion.

“[We] are in the middle of a speculative bubble that will burst,” says Wyndham Lewis, managing partner and co-founder of metaverse company Curate42. “The valuations achieved have been driven by a small group of crypto speculators driving values up.

“The $38bn NFT market valuation achieved in 2021 was created by [less than 5% of] holders of crypto wallets. The market is currently structured like a pyramid, with returns on these valuations dependent on new buyers entering and continuing to drive up prices.”

So basically, this is a few very, very, very rich and frivolous people buying and owning these things (in fact, less than a tenth of all current crypto owners control 80% of the market). And when they get fed up and get out of the market?

I think we’re just starting to see the air leak out of this bubble, and there’s a lot more downside a-coming.

Here’s How We’ll Play It

Of course, NFTs don’t trade on normal exchanges (why would they??) You could go to https://www.synfutures.com/ for naked shorting – or, more sensibly, pick up some puts on an ETF like Defiance Digital Revolution ETF (NYSEARCA: NFTZ).

$NFTZ, according to their manifesto, “offers investors thematic exposure to the NFT (Non-Fungible Tokens), blockchain and cryptocurrency ecosystems, which include NFT marketplaces and issuers such as Coinbase and Playboy.” (I’d be more than delighted to short Playboy on principle, HEFNER YA PERV.) 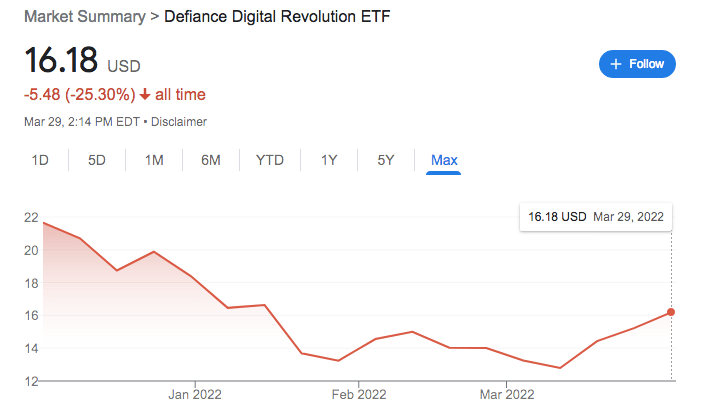 I’ve about run out of hate-steam for the time being (this story ended up much more involved than I thought it would) so I’ll see y’all tomorrow on Money Calendar Friday.