Liz here with a fresh pile of “Bleh” for you. Happy Thursday!

Today we’re going to get deep into the weeds on “social style marketplace” Poshmark, which unwisely IPO’d in January 2021 and has gone straight downhill from there. 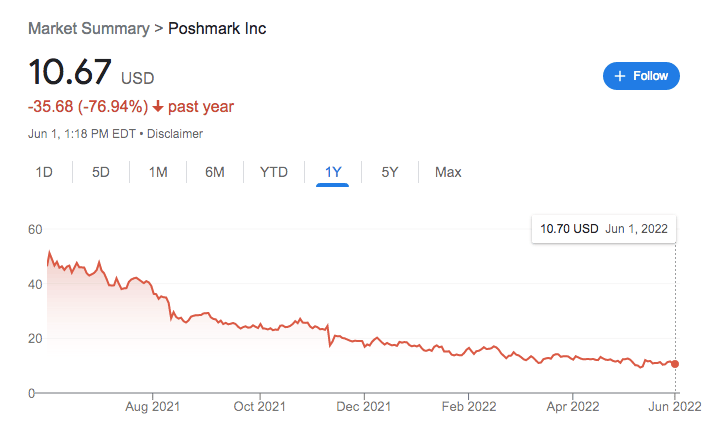 I’ve also got numbers, because gosh darn it, everyone keeps telling me I need numbers.

Why Penelope (And Many, Many Other People) Hate Poshmark

My friend Penelope (not her real name) has a staggering number of parrots (not the exact animal). The parrots have mounting vet bills for feather fungus and beak blight, so Penelope joined Poshmark for some extra income.

At its base, Poshmark is an online thrift store like most of the others: eBay, Etsy, ThredUp. They take a commission, and they hook eager vintage sellers up with equally eager vintage buyers.

They also optimistically went public at the beginning of 2021 – at the height of Covid lockdowns when people were still stuck at home buying things from online retailers. They had made a $25.2 million profit in 2020, and they assumed, perhaps foolishly, that we would all be home shopping online forever. (Sounds eerily familiar.)

Over the subsequent year, POSH reported a loss of $44.4 million and kissed 84% of their stock price goodbye.

An instructive note on POSH: While not profitable, they do have positive free cash flow and no debt. Yet, even with that going for them, they are still in the Z-Score “danger zone” (not quite at imminent bankruptcy level yet, but approaching the territory.)

Insiders are starting to get wise.

Part of POSH’s issue is its unsustainable, almost MLM-style business model. They spend about 40% of revenue annually on marketing, but once they pull in new customers, those customers don’t buy very much over time. Seeking Alpha (which occasionally has good insight) says, “There has been very limited growth in transactions per customer; therefore, in order to have growth, they just depend on getting new users.”

And why are all these new users buying less and less over time? Well, because, as Penelope discovered, POSHMARK SUCKS.

Penelope first started to notice problems earlier this year, when, in her words, “they f***** up the search results and made it much harder for people to find your listings, And then you don’t sell s***.”

“They changed it to something called ‘simple search,’ she said. “So if someone searched on ‘Free People Sunny Days Tunic Dress’ crazy things would come up in search, like listings with just ‘Free People dress’ as the title, or something from a totally different brand that had ‘sunny’ something in the title, to a Free People shirt when clearly you searched specifically for a dress.”

Penelope was P.O.’ed. She sent me over some screenshots from a private poll in a Poshmark sellers group – and then a picture of what’s happened to her own sales since the new search algorithm rolled out. 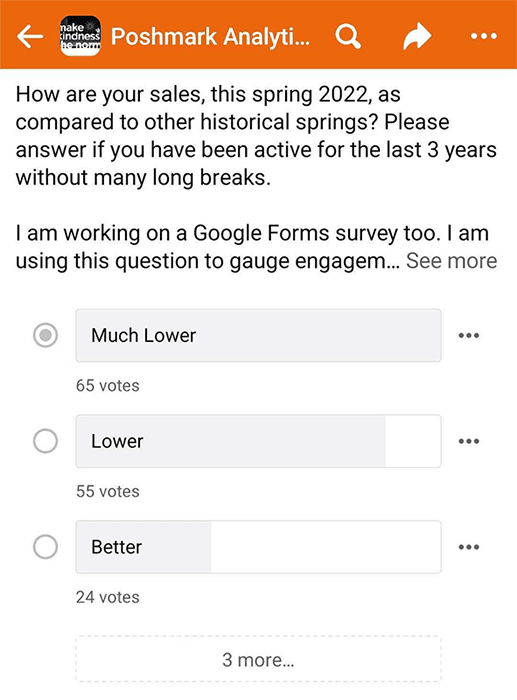 This is Penelope’s own dip in sales. Yesterday morning, she accepted a lowball offer just to move inventory. “I took $30 for those leggings because I will take any f***** sale right now,” she said. Penelope is a colorful person, who, dare I say, swears like a pirate’s parrot. 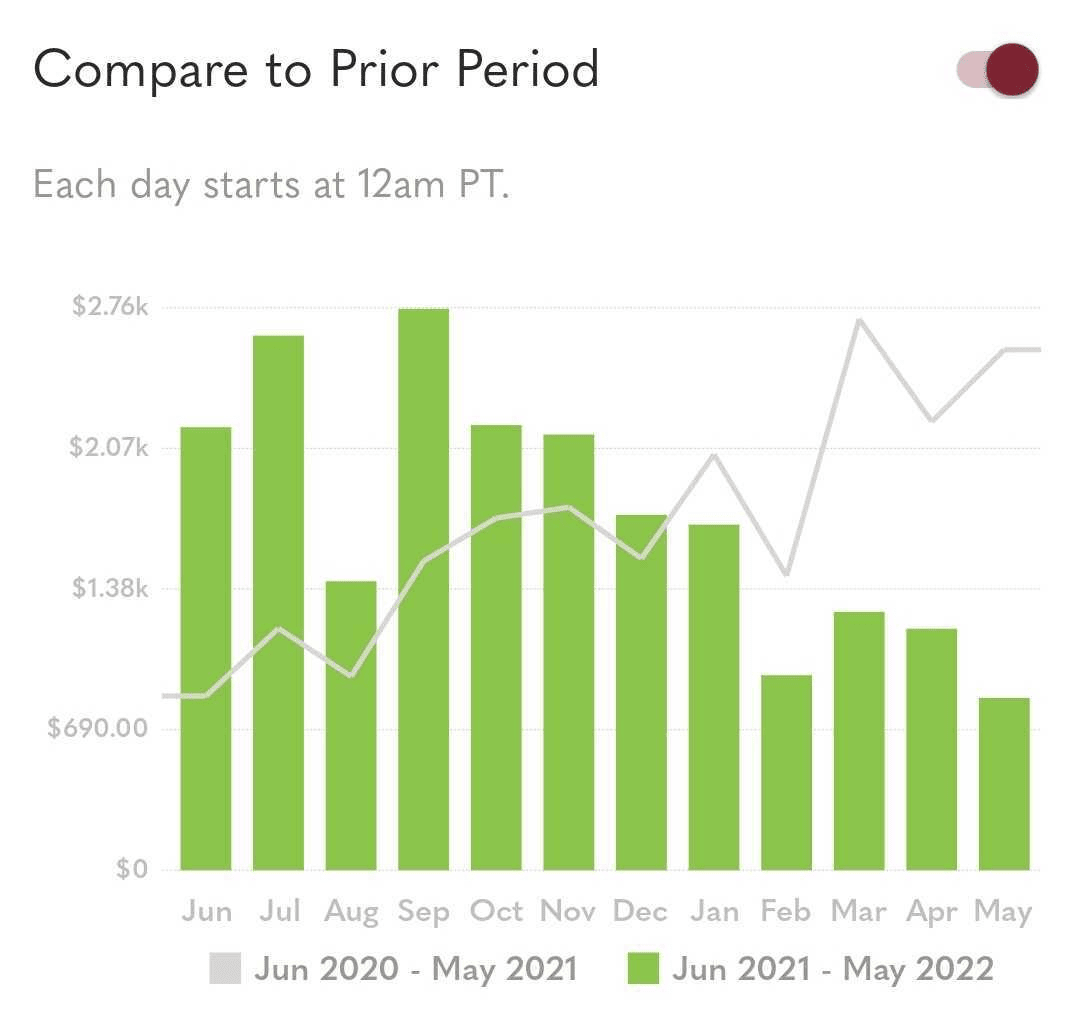 These are far from the only problems presenting themselves to Poshmark peeps.

Perhaps the biggest issue, though, is the IRS. (Dun, dun, dun!)

One thing that drew Penelope (and many other sellers) to Poshmark was the fact that, unless you made $20,000 a year on the site, you weren’t required to report any of it on your taxes. $20k a year, tax free, pays for a lot of birdseed.

That will all change for tax year 2022, though…

In January 2023, because that’s when our tax forms arrive in the mail, Poshmark sellers will be required to submit a Form 1099-K for any Poshmark sales exceeding $600.

Worse, that looks like it’ll be retroactive for every year you sold with Poshmark.

Penelope said frankly, “This will have a HUGE impact on small-time sellers. Like, people selling stuff from their own closet will have to pay taxes? That’s complete BS.”

She added (getting fired up about it at this point) “I had to give them my social security number in January 2022! Once I hit $600 in sales I wasn’t even able to print out a shipping label for a sale until I gave them my SSN. So next January I get a 1099 and have to report to the IRS.”

Would you give Poshmark your Social Security number? Would you?

What do you bet that in January 2023, a whole lot of Poshmark sellers are going to open up that 1099 form, say “Screw this,” and quit Poshing? (Yes, that is a verb, and the Posh people are officially called Poshers. Their site also refers to “spreading Posh love,” which I think sounds like an STD.)

Let’s grab some reasonably-priced January puts – we might even see a dip before then, as the 1099 fiasco gets more media coverage.

I can’t close this article without a Chitty Chitty Bang Bang reference. This peculiar song has been floating weightlessly in my head since I began to write:

“Oh the posh posh traveling life, the traveling life for me
First cabin and captain’s table, regal company
Whenever I’m bored I travel abroad but ever so properly,
Port out, starboard home, posh with a capital P-O-S-H, posh!” 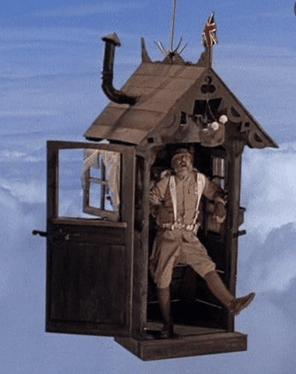