Liz here, with a cautionary tale for bad children.

Am I a witch? Well, no, not exactly. But I am feeling a little extra green today.

On January 25, I set a $200 target for NFLX and theorized that it would lose 45% and get down to that level in three months. 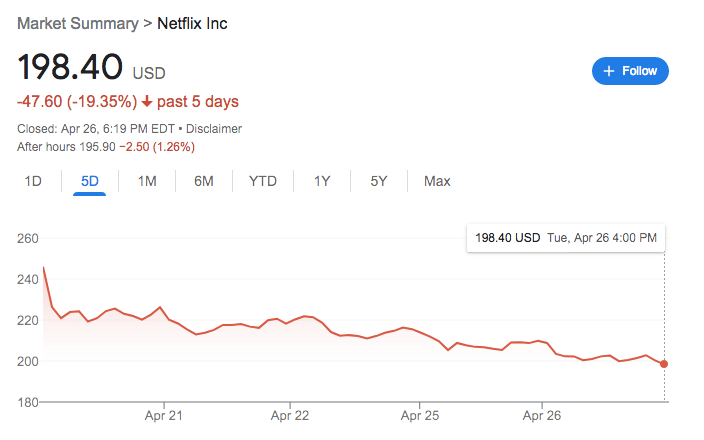 I say all this, not to frighten you – well, maybe a little. (Margaret Hamilton, the Wicked Witch from the Wizard of Oz, spent her post-Oz career visiting schools explaining that she was really a nice kindergarten teacher. She even went on Mr. Rogers as a last-ditch attempt. Did children still think she was a witch? Why, yes, they did.)

But I do want to draw your attention to the death of streaming – and NFLX is just the beginning, really.

But it’s quite possible that you’ll have a little extra green in your pocket.

Quick pop quiz: What doesn’t belong in this otherwise ordinary picture of Manhattan? 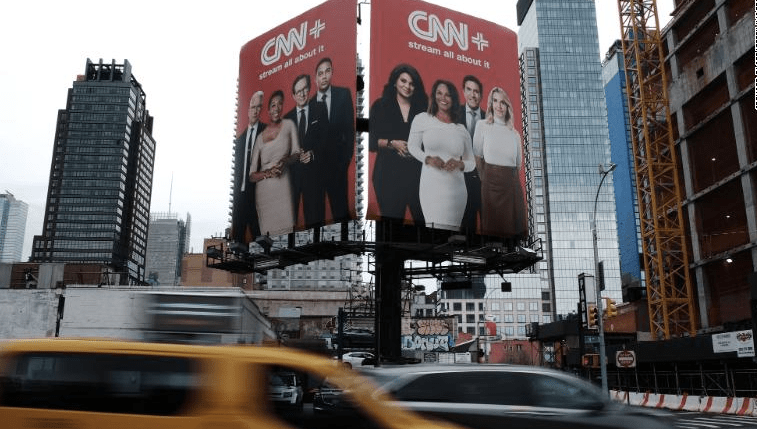 That would be the billboard for the ill-fated streaming service CNN+, which has just set the record for the Fastest Death in the East. They launched on March 27 with high hopes, spent $300 million on top-dollar talent and programming…and their last day on air will be April 30.

You know those little bugs that live for a day, f***, and die? Like that. 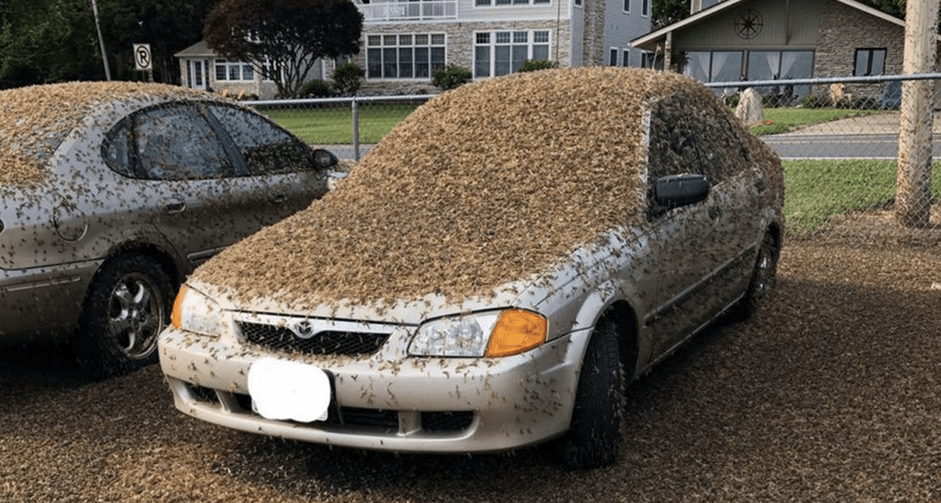 This picture, ironically from CNN, shows what happens when swarms of these bugs f*** and die all over your car. And that is basically what’s happening to streaming services worldwide.

Before I go on with this story, it’s worthwhile reproducing this tweet from journalist Ellie Smith, who wrote: “PSA if you’re going to tweet something snarky about CNN+, hundreds of journalists and technicians who did nothing but work their tails off just had the rug pulled out from under them. So be kind.”

About 350 employees will likely be laid off, though they’ll be given a generous severance package and encouraged to apply to other positions at CNN. “This is a uniquely s****y situation,” says CNN boss Chris Licht, who took over that role after former CEO Jeff Zucker had to step down in February. (More on that momentarily.)

No snark here for CNN+, though I will try to dig through the rubble with you and figure out what happened. More so, this is about the overall death of streaming – and how, because we’re really just monsters at heart, we might as well make some money.

I’ll go ahead and spill the pick right here – the stock we’re looking at today is Warner Bros Discovery Inc (NASDAQ: WBD), the Frankenspinoff company that owns (or, owned) CNN+ and, since going public in early April, has done this. 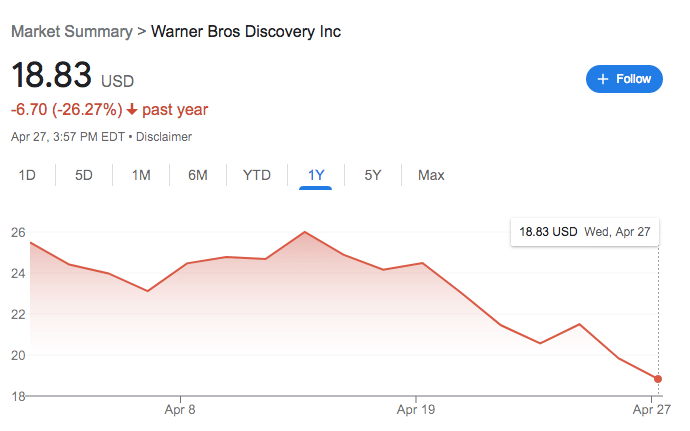 WBD gets the worst of two worlds right now: the death of streaming and the death of cable. I suspect we’re going to see an extra dip at the end of this week as CNN+ officially folds – but there’s even more skullduggery in store down the road.

No, Random Spam Person, My Kid Does Not Want to Be a Netflix Star

Every now and then, I get spam emails from KidsCasting (well, all right, I visited their site once because I think I have a photogenic child) and one of their most recent mailings suggested that my child might dream of becoming the next Netflix star. My instant reaction to this was: WHO WOULD ACTUALLY WANT THIS? Whose ambition, at this point, is to grow up and become a “Netflix star?” That’s not…a thing.

For awhile, though, it could have been. Until NFLX fell off the cliff last week, it led a pack of copycat streaming platforms a merry chase for 10 years. Disney Plus, Hulu, Peacock, Apple, Amazon, Paramount Plus, HBO Max – everyone wanted a piece of that sweet, sweet customizable content pie, amirite?

Then, a series of strange warning bells began to sound.

Quibi lasted six months (during the height of the pandemic in 2020, no less).

I said NFLX was bleh in January of this year.

Shareholders said “bleh” (to the tune of 20%) about Paramount’s beefed-up streaming service in February.

And then, last week, came Streamageddon.

The Financial Times had a lovely piece about all this, cleverly called “Are you still watching?” and their musings about the streaming model follow:

“That model transformed the television and movie industries and launched a fiercely competitive war for subscribers. But the streaming industry’s growth rested on the assumption that there is a global market of up to 1bn households willing to pay for services. Now, some analysts say the actual market may be far smaller – and that it is time for a rethink of the streaming business that Netflix pioneered. Netflix’s subscriber warning was ‘almost like an acknowledgment . . . that this isn’t that great of a business’, said Michael Nathanson, an analyst at MoffettNathanson and a longtime sceptic of the Netflix model. ‘It makes you really wonder if the media companies should roll back some of their ambition to be like Netflix.'”

And they added: “(The) Netflix announcement this month seemed to confirm something for investors: that no matter how great the programming, it is unlikely that the streaming industry will ever generate the kinds of profits that television and film groups made in the pre-streaming era.”

That’s interesting, because “pre-streaming” television was, well, cable – and traditional cable is dying, too. (There are 32 million “cord cutters” and counting in the U.S — I very nearly became one of them a couple of years ago, and then mercifully didn’t, because we were unexpectedly quarantined and Bubble Guppies ended up being a lifesaver.)

This was a chart from a few months back – before streaming began to die. Now, the trajectory might look a little different – with both lines pointed sharply downwards. 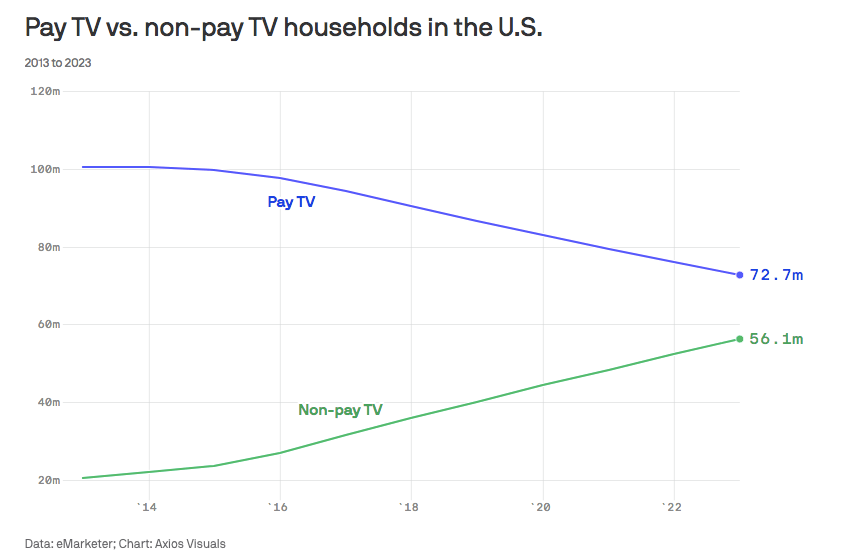 This sort of begs the question – if cable is dying, and streaming is now dying too, what the hell are we going to watch? Surely we’re not all going to start reading books again. How barbaric.

In Forbes’ opinion, we won’t find ourselves at this extreme. Instead, the two media will sort of collapse into each other.

Basically, the boring old cable networks will die. The streaming networks will live on, but they’ll essentially become cable. They’ll start running ads (something Netflix is already making noises about), and offering larger and larger “streaming bundles” of various intellectual properties that will, eventually, become indistinguishable from premium cable packages.

“Clearly the heavy ad load in linear TV has been and will be a problem, but the notion that it takes a mix of consumer subscription revenue and ad revenue to sustain a business looks as much a part of streaming TV’s future as linear TV’s past,” they write.

“Ah, we mock the thing we are to be (thank you Mel Brooks). The early streaming savants ridiculed the clunky old one-size-fits-all multichannel video model as they looked to a new “anything, anywhere, anytime” model. But already we see a countertrend in new streaming services. CNN+ launched barely days ago and is already on the verge of shutdown. The new leadership of Warner Bros. Discovery has hinted at a not-too-distant move to bring HBO Max and Discovery+ together. Disney bundles Disney+, Hulu and ESPN+ into a more appealing package. Canadian telecom provider Telus is now offering Netflix, Apple TV+ and Discovery+ in a sensibly priced bundle they call – wait for it – Stream+. Can a bundle of bundles be far behind?”

But until that happens, we have a front row seat to the simultaneous deaths of streaming and traditional cable. (Hail, Caesar, we about to die salute you!) And WBD is getting trounced by all of it.

What Happened to Baby Jane

CNN+ was an unfortunate side casualty of a business that doesn’t know how to run a business. Baby Jane was just crazy. 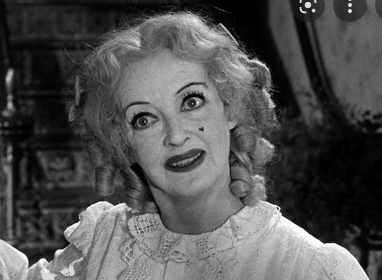 (That was, incidentally, also a Warner Bros. picture.)

Trouble is, the new Discovery brass didn’t think CNN+ was a good bet. According to CNBC, “Discovery had also already tried niche subscription streaming products, having rolled out GolfTV, cycling streaming network GCN+ and Food Network Kitchen in 2020 and 2021. None of those products moved the needle for Discovery. Zaslav and other members of the Discovery leadership, including JB Perrette, who was taking over as Warner Bros. Discovery‘s head of streaming, didn’t want to waste time plowing ahead with a strategy they’d already decided didn’t work.”

Right around the time of the merger, CNN’s head, Jeff Zucker, left the network in disgrace after it was discovered that (shock!) he had had a perfectly consensual relationship with a nice lady in his office (Allison, the head of marketing). SCANDAL! 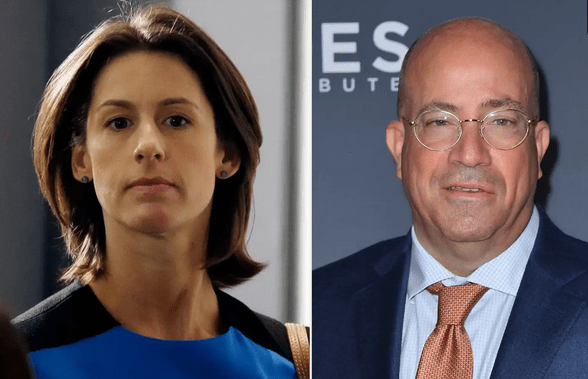 I hope they will be very happy together.

Allison left too (GOOD FOR HER), which caused problems with the marketing, and the new Discovery execs didn’t think the streaming product was a good idea to begin with. Eventually, the whole thing fell apart less than a month after it launched. (It will exist for exactly two more days – until April 30. Watch while you can!)

A lot of people at CNN find the CNN+ debacle to be broadly troubling. Again from CNBC:

More broadly than the CNN+ circus, though, WBD as a company has lots of big, red flags. And it’s still brand new!

First of all, the Frankencompany (WarnerMedia plus Discovery) came with a bundle of debt. (A streaming bundle, one might say.) Warner came in with $43 billion and Discovery came in with $15 billion, creating a combined debt burden of $58B. Subscribe and save!

Not only that, but it’s extremely expensive to make TV. (Money Morning LIVE is not cheap, either, just so you appreciate what we do.) WBD will be spending $20B on new content this year, and likely upping those figures each subsequent year (Disney+ spent $25B last year and expects to spend $33B this year, for reference). So basically, you have a big hole with money streaming out of it.

And not that much streaming back in. Some of WBD’s biggest properties are cable and satellite TV networks – CNN, HBO, HGTV, Cartoon Network. Last year, their advertising revenues were down 13% thanks to lower audiences. And all those people “pulling the cord?” Yes, that continues to be a thing – that number has, in fact, tripled since 2014.

They’re also, inexplicably, cutting out one part of streaming that does seem to work, at least temporarily – same day streams of theatrical releases. (Last year, 450,000 people signed up for HBO Max just so they could catch Wonder Woman 1984. But then, within six months, about half of those people had cancelled HBO Max, so there’s that.) Rather than deal with the heartbreak, WBD is just stopping this feature altogether – I can see both sides, honestly.

I always like to look at the Altman Z-Score for “Bleh” companies, and this one appears to be headed for distress even though it literally went public 17 days ago.

I apologize for my scanner, which misspells “bankruptcy.”

As you’ve probably surmised, I suspect the stock will take a further hit on Friday as CNN+ prepares for its end on April 30. But it’s going to be instructive to see this new company continue to stagger under the combined problems of streaming AND cable in the near future.

I was going to recommend the $20 puts when I was researching this article yesterday, but lo and behold! The stock’s already down below $18 today and those are ITM. (I privately count this as a win, because I’m evil.)

Let’s go with the equally cheap and liquid $17.50s – and if it moves too fast for us by press time tomorrow, you can get into the $15s.

I’d write more, but I’m a bit stuck at the moment. 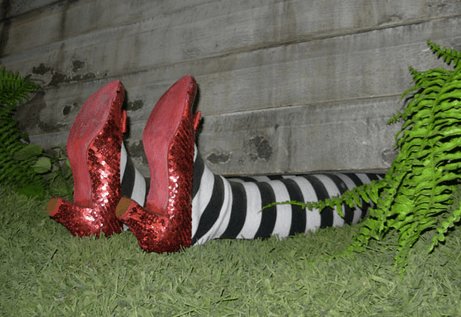 Never bet against the house. The house always wins.