Liz here, listening to “fart music” on Alexa. (Why did I ever get this evil little round panda-shaped spy device for my child?)

I wish I could straight-up short Alexa, but that is a fool’s errand. The best I can do for ya is a short on a “smart home” company that Alexa is about to kill.

After this week’s bizarre Insteon collapse, we’re going to see a lot more carnage in the “dumb home” space, and I am here for it.

Smart toilets? Smart hairbrushes? Smart egg cartons? I can’t wait to see them all die in a fire, much like the original smart home in Ray Bradbury’s 1950 science fiction story, “There Will Come Soft Rains”:

“In the kitchen, an instant before the rain of fire and timber, the stove could be seen making breakfasts at a psychopathic rate, ten dozen eggs, six loaves of toast, twenty dozen bacon strips, which, eaten by fire, started the stove working again, hysterically hissing!”

That story was supposed to take place in August 2026, by the way, so we have approximately 4 years to get out in front of this play.

Let me sing you the sad, but at the same time completely unsurprising, ballad of what happened to “connected home” company Insteon this past week.

Insteon has developed an “Insteon Hub” which allows you to hook up any number of Insteon products (sensors, thermostats, outlets, lights) and control them magically. Until, last Friday, suddenly…you just couldn’t.

IT Pro also observed the curious phenomenon that Insteon’s CEO, Rob Lilleness, has removed all reference to the company from his Linkedin: “Lilleness also appears to have taken any identifiable information out of his profile, changing his screen name to ‘Ro L’ and removing his profile image.”

So, basically he did this. Now no one will recognize him. 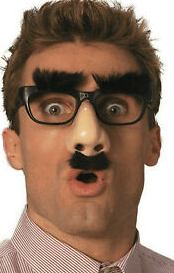 Fortunately, Internet commenters have maintained their sense of humor about the whole thing (where would we be without these forums, truly?) 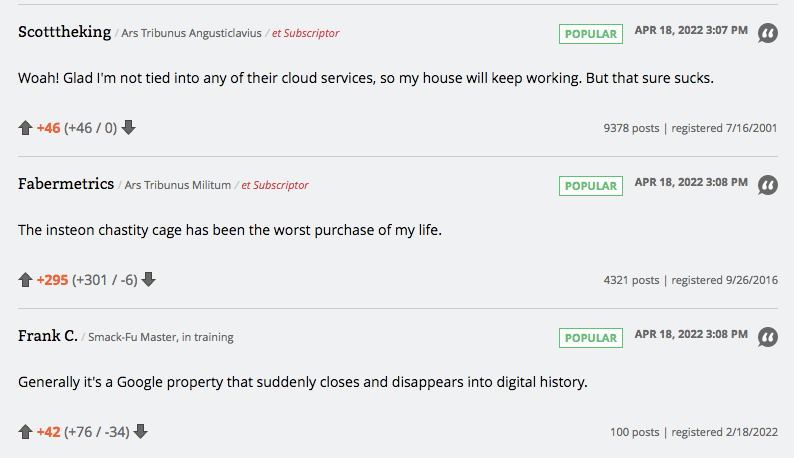 The Insteon debacle is a brutal cross-section of the bigger problem with Smart Home World. (Once upon a time, when the “Body Worlds” exhibition came to my city, I saw an actual human cut up into cross-sections: very precise little round slices of arms and legs and torso, and whenever I hear the word “cross-section” that’s what comes to mind.)

The body of this problem – as it were – is the fact that there are about one million “smart home” companies, and none of them talk to each other. Insteon’s products don’t work with any other company’s products, except through a complex system of jerry-rigging.

This is by design, of course – similar to the rationale behind Apple’s chargers only working with Apple products. (YOU FIENDS.) Imagine that your entire house was an Apple product and you only had an Android charger for it.

The impossibly byzantine workarounds you need when your HOUSE STOPS WORKING are often more effort than configuring a smart home to begin with. Again from IT Pro:

“Some (of the disgruntled Insteon) users have reported success using HOOBS which has released a plugin specifically for Insteon users. This method allows users to restore functionality to their Insteon devices and expose them to Apple Homekit, Amazon Alexa, or Google Home to control their devices through smart assistants…American company HomeSeer also said it offers an alternative to users. It would involve buying a new hub from HomeSeer, connecting it to the Insteon Hub using a specific Insteon plugin, and then controlling the devices through the HomeSeer app… Home Assistant currently lists several Insteon products that are compatible with the software, though some are missing, such as thermostats.”

Now, imagine that you have multiple smart products, on multiple different networks, running throughout your house and none of them are talking to each other. (It’s like family therapy!)

“The SmartThings lights in my bedroom don’t work with Apple’s Siri assistant, and my Tilt blinds only work with Alexa. To control my Liftmaster garage door opener by voice, I must first connect it through a third-party service called IFTTT. The Philips Wiz smart bulb outside my office doesn’t work with Apple’s HomeKit system (though Philips’s separate Hue lighting brand does).”

What we have here is a failure to communicate. Any one of the approximately one million smart home companies – most of whom run on different software and hardware – can have server issues and shut down at any time, mysteriously disappearing into the cloud.

When that happens, panic ensues. As ReviewGeek says, “Insteon may be the latest example of this problem, but it’s far from the first. We saw the Wink hub die last year, and Lowe’s shut down its Iris servers back in 2018, leaving customers in the dark.”

I am personally in the dark as to why anyone would “connect their home” to begin with, but you do you, boo.

That’s not even getting into the myriad scary privacy issues of a smart home — often compounded by the fact that “off-brand” smart devices use big chunks of outdated code that can be easily hacked by evil guys in nose-and-glasses masks.

The Washington Post quotes an expert who gave me an image I will now never unsee (bolding mine):

“Smart home devices have a long rap sheet, said Chris Rouland, chief executive of connected-device security company Phosphorus Cybersecurity. Your crockpot could be viewing illicit pornography. Your DVR could take down Twitter. And, thanks to a flood of shoddy smart home devices, hackers are making money at your expense, Rouland said.”

Your crockpot. YOUR CROCKPOT. It could be sitting there viewing this filth for the entire eight hours that you are out of your house, while the smell of smart beef stroganoff fills the air.

(Wyze, by the way, refused to address its security breach in any way for a full two years).

The writing is already on the wall as far as where this industry is going. In 2021, the Consumer Technology Association released a report that forecasted record-breaking tech revenues for the year…in every frontier except smart technology. That sad little pocket of goop was destined for flat revenues and unit sales up only 11%.

You can see the curve flattening before your eyes (source: Statista). 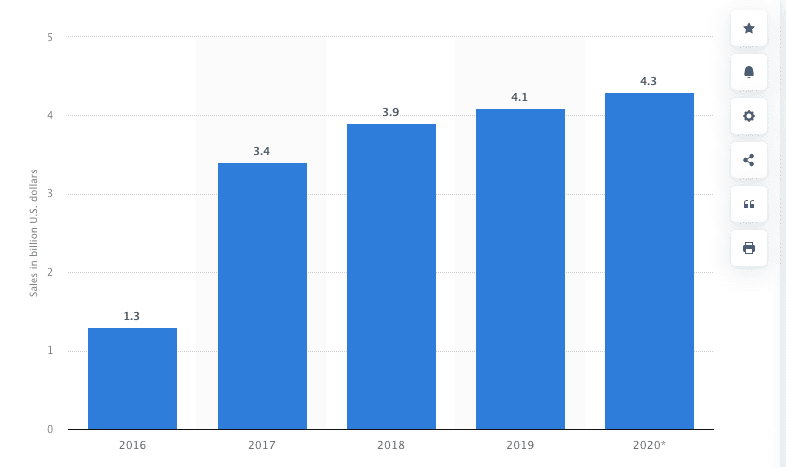 How do we short this disconnected, frenetic, tessellated madness? LET ME AT THE ETF, I would normally say.

But there’s a new wrinkle coming on the scene: MATTER.

One Ring (Doorbell) to Rule Them All

Mind over matter! I don’t mind, and you don’t matter! That was a motivational tidbit that my father’s high school wrestling coach used to yell at him (back in the days before we all were pansies). I understand he was quite a good high school wrestler.

MATTER, for smart home purposes, is an Avengers-like protocol that’s expected to roll out this fall, after several prior delays. Essentially, it’s a backbone that will allow all “Matter-certified” devices to talk to each other (and that will be virtually all the major tech brands – Amazon, Apple, Samsung, Google, and all their servile and conspicuously feminine virtual assistants. A harem! I digress).

“‘If it succeeds, this new standard will be a huge improvement, and will allow consumers to choose models based on features and price rather than compatibility with a specific system, free from the worry that they may stop working due to inevitable changes in the industry,’ says Bernie Deitrick, who has tested a variety of connected devices at Consumer Reports.

“Because of these compatibility issues, Amazon, Apple, Google, Samsung, and other companies came together through the Connectivity Standards Alliance (CSA), a standards-setting organization for the Internet of Things industry, to create a new connectivity standard-called Matter-for smart home devices. The effort began over two years ago as Project Connected Home over IP (CHIP) and its supporting companies have grown from a few dozen to over 200.”

Well, THAT begs the question: What happens to companies that DON’T join the Empire, that is, become Matter-certified? Or those that can’t?

ReviewGeek opines ominously: “(W)ith the coming rise of Matter, a new smart home unification standard, brands that fail to keep up with the times will surely disappear.”

And the brands that disappear – well, THOSE are the ones we want to short. Kemosabe? (That word has been ruled not offensive in court, so I can use it in editorial.)

Interestingly, there’s a clear loser here right out of the gate…

Zigbee Vs. Z-Wave: Not a WWE Promo

My first husband (God rest his soul) was about ten years older than me and inexplicably into professional wrestling. This is Goldust vs. the Undertaker, apparently. I actually understand the need for nubile virtual assistants more than I understand this.

Zigbee is the backbone of the MATTER protocol. It’s a “low-power wireless mesh network,” which is what MATTER will run on, and it was first created in 2004 by a bunch of developers called the “Zigbee Alliance.” (They rebranded a couple of years ago to become the much less cartoonish-sounding Connectivity Standards Alliance.)

Trouble is, the Zigbee network has a long-standing rival network: the Z-Wave protocol, a “system on a chip.” As the Cat in the Hat says, “Don’t ask me how VOOM works. I never will know.” The important thing is that Z-Wave works differently from Zigbee, it won’t be Matter-compatible – and it’s not going to get to come to the party this fall.

From the Ambient: “(With the MATTER launch), we could be looking at one of the biggest ever shake ups in the smart homeworld. It might seem, looking from the outside at least, that Z-Wave could be a casualty of this shake-up.”

Z-Wave is trying to spin this fundamental incompatibility as “an opportunity to develop interoperability,” which is just code for “we’re going to have to sit at the weird table with the art students.”

And they are – you guessed it – publicly traded!

The Z-Wave network is owned by Silicon Labs (NASDAQ: SLAB), and actually…they haven’t been looking so hot this year. 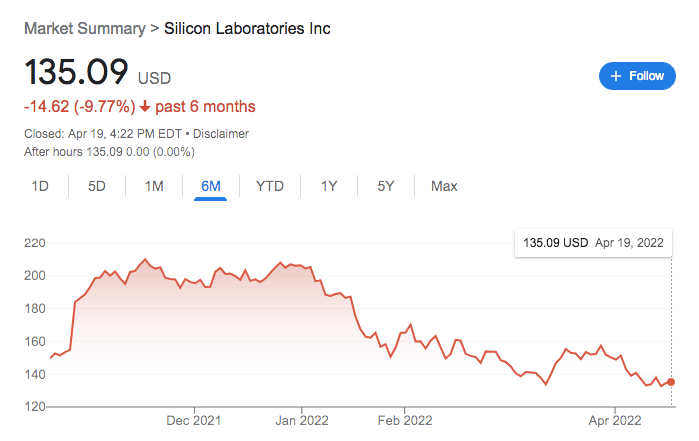 Come fall, when Matter rolls out…I bet we’re going to see a dropoff in sales for SLAB, and a further dip in stock price. Maybe even before.

We’re a bit limited in what options we can buy (and the ones that are there are kind of expensive) so I’ve had to settle a little bit. There are October calls, but not October puts, which would be my first choice.

The December puts are insanely expensive, so we’ll put on a spread. Bright side: we’re hedged, and we have a lot of time value built in!

I’ll leave you with Ray Bradbury’s charming 1950s version of the Roomba:

“Out of warrens in the wall, tiny robot mice darted. The rooms were a crawl with the small cleaning animals, all rubber and metal. They thudded against chairs, whirling their moustached runners, kneading the rug nap, sucking gently at hidden dust. Then, like mysterious invaders, they popped into their burrows. Their pink electric eyes faded. The house was clean.”

Not gonna lie, I do kind of wish I had some of those.