Liz here, still shuddering. Last night, at the witching hour, I awoke to terrible howls. My child stumbled into my room sobbing in fright (my husband, sadly, was in jail and unable to help). *

*He is not incarcerated, he just works there, but I like freaking people out.

I asked the child what was the matter, and he wailed, “I had a terrible … terrible scary dream. I saw something BAD.”

What was this bad thing, I asked nervously. (This is the same child who asked casually the other night at bedtime, “Who’s that behind you, Daddy? The shadow. The shadow with the hat.”)

He took a deep, trembling breath and said, “THE BLUETOOTH IN THE CAR WAS DISCONNECTED.”

I don’t think either of us slept a wink for the rest of that night.

In less bone-chilling news, you scored a 35% flash profit this morning on 8-Ball’s TLT calls – and now I’ve got a brand-new CJ trade for you that, incidentally, sounds an awful lot like an 8-Ball trade from last week.

This one comes hot on the heels of CJ’s double-barrelled X success yesterday. CJ’s also been killing it in Night Trader, which, when we were launching it years ago, we used to privately call “Night Stalker.” (The more you know…)

Take a look at his STALKER gains from last week…

You can get in on the spooky night action here.

I was going to write “I’ll be brief,” and then it occurred to me that thanks to my unborn child’s food preferences, I’m 80% cheese right now. You are what you eat!

CJ was getting off a plane this morning, and I hounded him for this trade throughout the airport. I had to send him three (3) Hamsters of Death, which is maximum possible urgency.

Eventually (JUST BEFORE PRESS TIME), he sent me this – but as always, it was worth the wait, because it included a heavy dose of mea culpa.

We are shorting Barrick Gold Corp (NYSE: GOLD) (HE SAID).

The Night Trader system flashed a sell signal on Friday that I foolishly didn’t follow, partially because we’re so short in the portfolio already.

And there’s another signal today, even though the decline is contained so far.

The stock is breaking down along with Gold and the rest of the commodities space.

Strong dollar is eroding the need for the hedged trade on Gold. And the “Economic Super Cycle” trade that I talked about on the “Long & Short” two weeks ago has a huge impact on the commodites market, which has been one of the safe havens for traders. 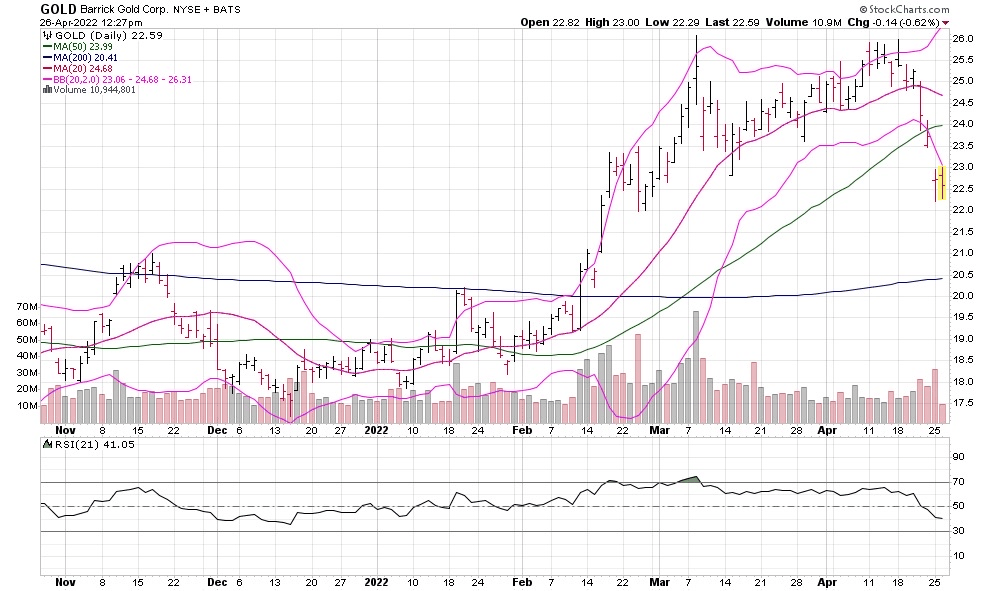 This is a nice, easy Nickel Slots trade. Here’s what to do:

I’ll be back tomorrow with – hopefully – an extremely juicy insider secret about Quantum Scripts for you. In the meantime, you can see how the machine works here.

P.S. We just got a memo that that first Mega Trade hit its first 100% profit target… in less than two trading days. I’m not allowed to tell you what it is, though.