Liz here, feeling nostalgic! Back when we all worked at a place called the “office,” and when we traveled on these strange machines called “airplanes”… CJ used to fly from Cincinnati to Baltimore quite a lot.

We barely ever see him now. BOO.

Back in the day, CJ always flew Delta, and whenever he was on the plane, he would pick up an extra package of their signature snack cookies, called Biscoffs. And he would leave them on my desk, because he’s just that nice.

Last night CJ sent me this Slack and I got INCREDIBLY excited: 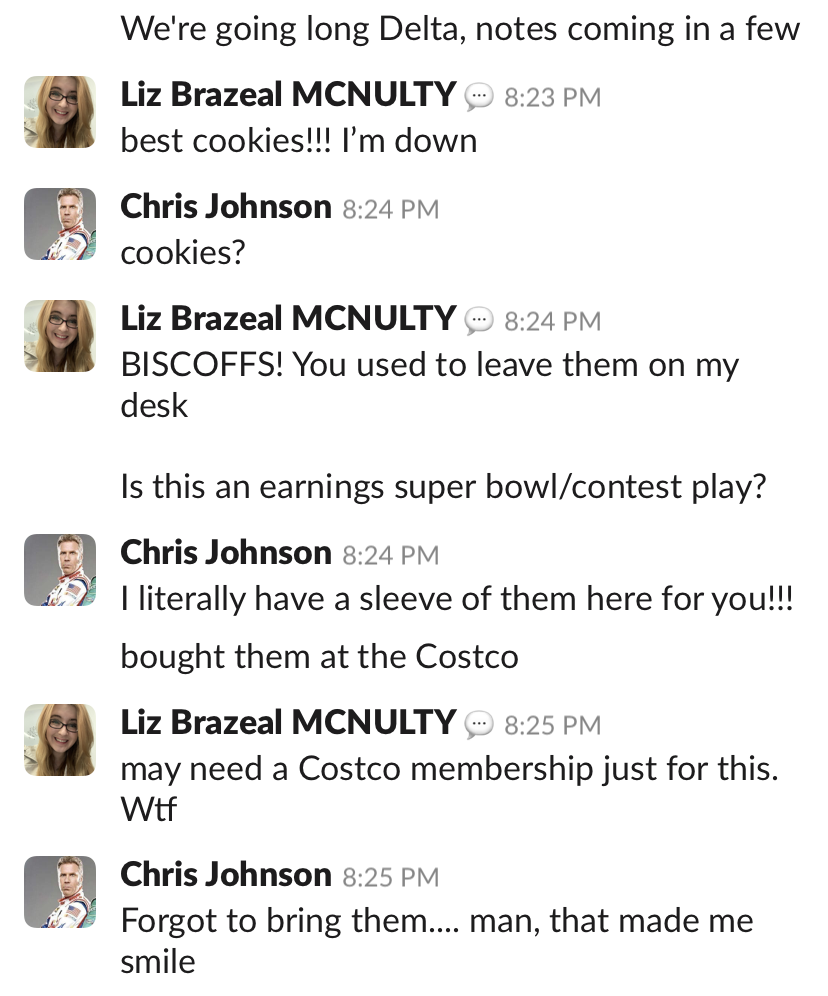 So that’s it! We’re going long Delta AND I have a sleeve of my fave cookies ever waiting for me. It’s a great day.

(By the way, this is NOT an Earnings Super Bowl play. WHATEVER, CJ.)

This Isn’t An EARNINGS SUPER BOWL Play, But I’m Willing to Overlook It

CJ, as always, sent me over a lovely bit of analysis (though, sadly, we don’t have a serial killer chart this time). Here it is:

This week’s merger between Spirit and Frontier Airlines is focusing new speculative attention to the sector.

Remember that one of my “Ten Commandments of Trading” is that markets are driven higher by speculation, not fundamentals. This bodes well for the airlines.

Delta Air Lines, Inc. (NYSE: DAL) represents the “Best in Breed” in the Airline sector based on relative strength and technicals.

If you NEED the fundamental story, DAL continues to fortify their core traveling base as the company has made stride towards monetizing their Skymiles program as a frequent fliers get back in the air.

Also on the fundamental side, recent data indicates that the surge in pandemic numbers may be ebbing, a development that will fuel cash flow into the airline sector.

Similarly, the stock rallied back above its 50-day moving average, which is also transitioning into a bullish trend.

Put simply, this stock is a technical unicorn in the current market. 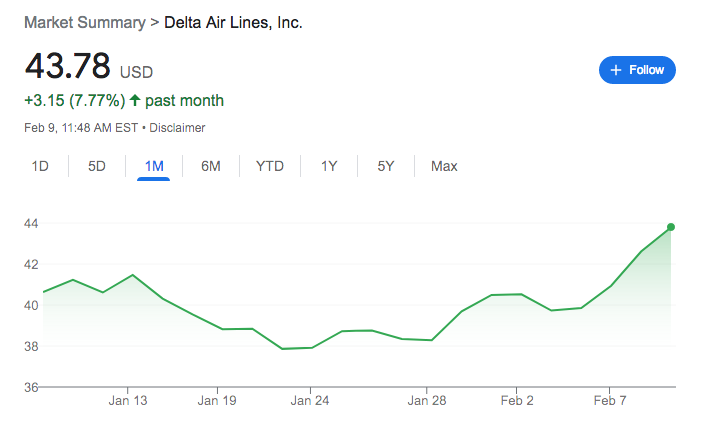 Here’s how you trade it…

(Liz again, dipping back in.) For the newbies (I keep seeing you sign up on our list! Welcome!) we try to offer a less risky trade called “Nickel Slots” and a riskier trade called “Dollar Slots.” CJ’s stock play falls into that Nickel category, and the two unhedged, rather expensive options both go under Dollar Slots.

Here’s your official Actions to Take:

Can I say, as an unrelated tangent, that Delta is the best and Southwest is the worst. If I never have to line up again by a series of posts like a beef cow waiting to have a bolt put through its skull, it will be too soon. I may even target LUV as a “blehh” stock soon – we’ll see.

I’ll be back tomorrow with a brand-new Garrett trade (I’m hoping he’ll at least get in the spirit and give me a Third Friday-oriented play, because we only have three official entries in the race right now.)

Also, don’t forget to watch the World’s Biggest Trade tonight! It’s 8pm ET on a Wednesday. Where else are you gonna be?