Liz here, avoiding illicit substances. I’ve never really felt the need to use them. I once read a long list of “thoughts people have while high” and realized “those just sound like my normal thoughts.”

Actually, that’s not quite true. While my first husband Sean (God rest his soul) was battling late-stage cancer, a lot of people recommended that he try THC oil. (Surprisingly, some of the most vocal of these people were little old church ladies, who ran CBD side hustles. Baptists and hallucinogens are having a moment.)

The gunk was so disgusting that we could not bring ourselves to touch it. I put it very far back underneath a cupboard and hoped that it would disappear, and eventually, I unlawfully disposed of it by hiding it in the bottom of a garbage bag.

If my second husband, who is in law enforcement, ever reads this, I apologize and you may arrest me now. 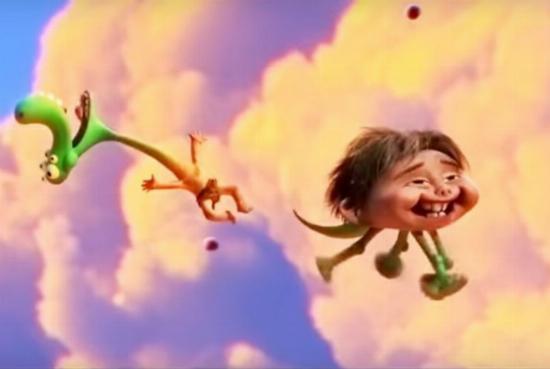 (Source: Disney, whose long history of substance abuse depictions goes all the way back to “Alice in Wonderland”)

ANYWAY, we’re taking a break from our regularly scheduled Options NASCAR program to bring you something a little different – a bona fide pot play from Garrett.

Garrett’s long-shot NASCAR play brought in a quick 100% recently – and not too long ago he also gifted us a magnificent triple-digit flash trade on TWTR, so you know he can pick ’em.

And today he’s picked a cannabis company that actually operates out of a former Hershey Chocolate factory – which puts me inescapably in mind of Hershey Park, and makes me wonder what a family-friendly, pot-themed amusement park would be like…

Ride the Green Goddess! Hop on the Sinister Minister! Unfortunately, there’s a 2+ hour wait time for the Whacky Tabacky!

(See, I honestly don’t have to take the stuff, it just comes naturally.)

This pot play is a put sale, so if you’re not collecting the credit, you’re picking up shares of a company you want at a bargain. Here’s what to do.

CGC Is Just Waiting for The U.S. To Get Its Hashish Together

Unfortunately, all this potential growth is contingent on federal legalization in the U.S., which hasn’t happened yet and is the main reason why I hid the black syringes in the back of the cupboard. 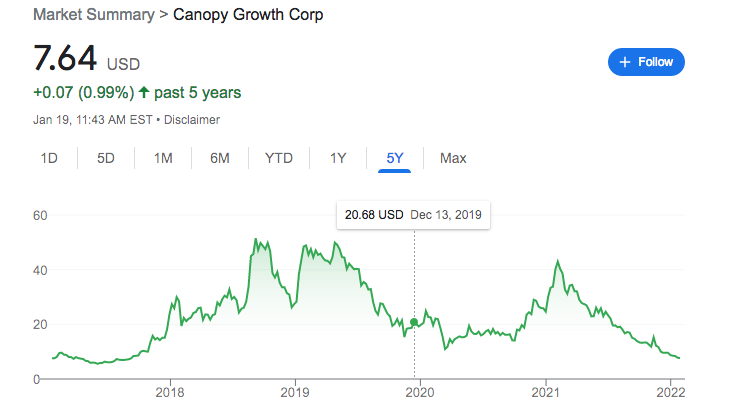 CGC’s suffered lately because recreational cannabis is legal in Canada, which means a glut of competition. Their quarterly revenue has fallen by 3% over the past year, while their quarterly expenses are up 37% – followed by a couple of analyst downgrades that haven’t helped, either. They’re also battling some shipping and distribution issues lately (aren’t we all).

From Garrett’s point of view, that means a buy point – or, rather, a put sale that will let you buy a great stock at a discount, if the shares move south of the sold strike.

Congress is working (no, really working this time!) on decriminalizing marijuana this spring, including setting up actual banks for the industry and magically erasing felonies. “We’re going to have a huge debate next year on cannabis, and they want to have that debate before the midterms,” says Tom Rodgers of Carlyle Consulting, a totally real cannabis lobbyist.

I’m going to keep a sharp eye on that banking industry myself, as there’s going to be a LOT of money there (pot is an $18B industry, or thereabouts)…

Years ago, as a young and hyperbolic writer, I found this really cool pattern that happened every year at tax time, where defense stocks (where the government puts all its money) rose along with (I presumed) the massive influx of cash from the under-the-table pot economy.

I couldn’t actually prove that the big piles of money were from pot, which is why the idea never really got off the ground, but the pattern was still there, and I had my suspicions. (Maybe I’ll pull it into an article sometime soon just for fun.)

I definitely didn’t call this idea “Legal “POT TAX CASH WINDOW” CLOSES May 1 – 26,100% potential gains still up for grabs,” or anything. That would have been oh so tacky.

This is a screenshot from part of the very long, old Word document that I just found. Don’t you want to see more?? 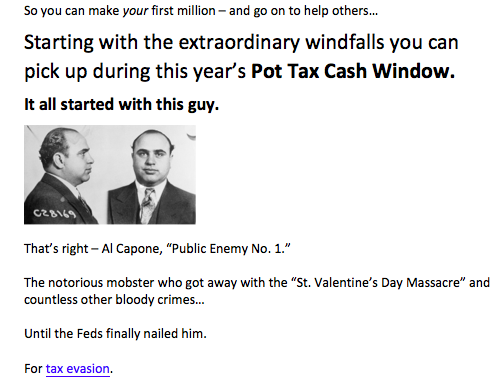 ANYWAY, surely full federal legalization can’t be far behind once this legislation starts passing in the spring – so Garrett wants us to buy CGC on sale and wait for the… high.

This is one of those win-win plays where you’ll be secretly delighted if you get the stock put to you, so I’ll call it Nickel Slots.

You could also just buy the stock, but why would you want to do that when you can take advantage of the 100% Legal Pot Tax Cash Loophole?

I’ll show myself out – but I’ll be back tomorrow with a couple of new plays from 8-Baller.