Liz here, waiting for my husband to get out of jail. (He works there, he is not incarcerated, but I like freaking people out.)

Today 8-Baller has a cyberwarfare long play for us — the company prevents hacks and data breaches, which are likely to become a bigger and bigger problem as the Russia conflict continues.

Here is the not at all creepy tagline from their website (but yes, they are good at what they do):

While we’re on the subject, I also want to make sure you’re in Warlock’s World, where you get all the fastest-moving trades every day from 8-Baller and the rest of the Kenny Glick entourage (most of them move too lickety-split for me to even include here).

Sometimes, though, 8-Baller sends me one that lasts a little longer (well, OK, this particular option has about 2 weeks of time built-in, but I’ll take it)…

I am all about this trade because my husband got cyberattacked AT JAIL and it was awful (I have that harrowing story right here).

The Jail Hack, And Why They Should Have Hired Tenable

Ok so. A while back, some sadistic person hacked into and destroyed the jail’s scheduling software, known as KRONOS, meaning that none of the officers could see what post they were supposed to be sent to that day. They just had to find out when they arrived at the facility.

Usually, the surprise is not a pleasant one. Over the past few months, I have called the jail many times and had this same conversation:

“Is KRONOS back up yet?”

“And where did they put you tonight?”

The latest tale from the mental health ward is that a large, naked gentleman refused to go back into his cell, and instead attacked my husband and shoved him into the wall. My husband punched him in the nose and then had to spend the rest of the night filling out paperwork about it.

When I told Andrea, my editor, about this, she said “As much as punching someone in the face and then writing about it sounds like my dream job, I couldn’t do it.”

I would not be surprised if this particular cyber attack ended up putting a few officers in the mental health ward when all is said and done. (I’ve booked a romantic weekend for us soon to stave off the despair.)

ANYWAY, 8-Baller’s play today is Tenable Holdings Inc (NASDAQ: TENB), a $621B “vulnerability management” company (sounds like the Mafia) that’s on track to generate over $1B in revenue over the next three years. 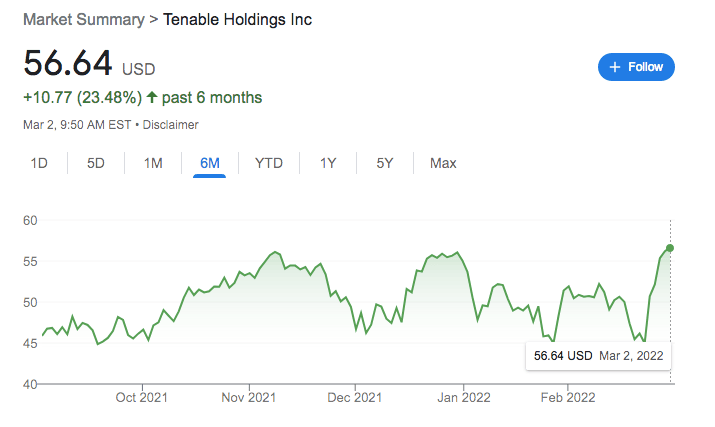 According to Needham & Company analysts, “With respect to critical infrastructure, Europe’s diversification away from Russian fuel is likely to lead to more Russian-based cyber attacks in the coming years. We view Tenable as the best publicly-traded company to play on the convergence of IT/OT assets. Privately-funded, multi-billion-dollar valuation companies such as Claroty, Dragos and Nozomi Networks are also leading the charge in IT/OT.” (This was the main quote that 8-Baller sent me, so I know it’s important.)

TENB had strong earnings, with revenue growing 26% YOY to beat the consensus estimate by a solid $4.5 million. They’ve also just been upgraded by a whole spate of analysts (NOT THAT WE CARE), including the aforementioned Needham & Company, as well as Morgan Stanley, Stifel Nicolaus, and Piper Sandler.

TENB’S major draw is that they cover 20% more “vulnerabilities” than their two biggest publicly traded rivals, Qualys (QLYS) and Rapid7 (RPD) – this sounds like they break 20% more people’s kneecaps, but actually, it just means that they stop gaps in a variety of different software.

That extra coverage – per their own investor presentation – is set to put them on that $1.1B revenue trajectory over the next three years: 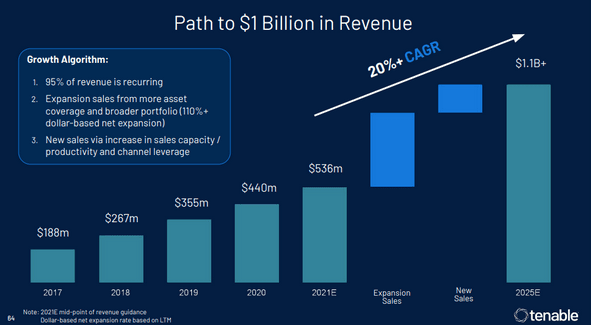 8-Baller – who, like all Warlock’s World peeps, moves fast – sent me two laconic sentences: “Daily is on verge of breaking out. Buy calls – and also buy the stock for the long term.”

That’ll be a straight stock play for Nickel Slots, and a shorter-term, only medium-expensive call for Dollar Slots.

In case you’re new here – I saw a bunch of folks come on over the past few days, welcome! – when we can, we like to give a couple of different plays that fit different risk-reward profiles…

Dollar Slots will be a bit higher risk, higher reward, while Nickel Slots will be more risk-off. (Not to say you can’t make a killing on those, too – because it’s definitely happened before.)

Don’t forget to head over to Warlock’s World to get the fast Kenny and 8-Baller picks that are too hot for me to handle in print.

I’ll see you LIVE on air tomorrow at 10:30 A.M. with a new “Blehh” stock! I’ve picked out an absolutely horrible one that you are sure to love. I’m actually chuckling with glee thinking about it.