Liz here, sick as a dog. I’ve got a new CJ trade for you, and, as the tighty whities said, I’ll be brief.

If you got my email this morning, congrats on your fourth win in three trading days (we’re on a streak – also, unfortunately, something the tighty whities could have said).

We’re coming down to our first SUPER BOWL deadline here (third Friday!) and as you know, we’ve already taken off a couple of profits: Tom’s unfortunate 12% (that was the fault of our lagging legal tracker) and my CMCSA 55% (I probably should have just taken off that whole position, as the second half is now down 50%).

Please be aware, though, that nice as CJ is, he still saves all his best stuff for Penny Nation. To quote a prejudiced line from Aladdin that Disney later changed, “It’s barbaric, but hey, it’s home.” Check it out here.

Speaking of faraway places, I’m starting to realize that I really should have called this whole competition Earnings Olympics, not Earnings Super Bowl, but IT IS WRITTEN IN STONE AND TOO LATE TO CHANGE.

Here’s your CJ fix for the day… and here is why I had to threaten him with the hamster of death.

As you may recall, I was going to send you a CJ trade yesterday, but I ended up having to go with Garrett.

CJ FINALLY sent me a nice writeup on Cinemark Holdings, Inc. (NYSE: CNK) after I bugged him again this morning. When I am bugging him, I send him my signature emoji, a hamster, which he refers to as “the hamster of death.”

Here is the hamster of death. It works wonders.

This is a Pandemic Get Out There 3.0 trade on CNK. This time it’s for real.

Option activity in the June expiry is light. But there was some serious call volume on the stock last week that is suggesting some positioning for this laggard to start leading.

“Get out there” stocks (I can’t believe that I’m typing that) are one of the few groups beginning to show technical strength as the consumer is clearly eager to get into that post-Omicron world.

Not from Liz: Below, you will find CJ’s explicitly delineated earnings strategy, which gets him the right to stay in the competition for an extra week, and also earns him a bonus point. 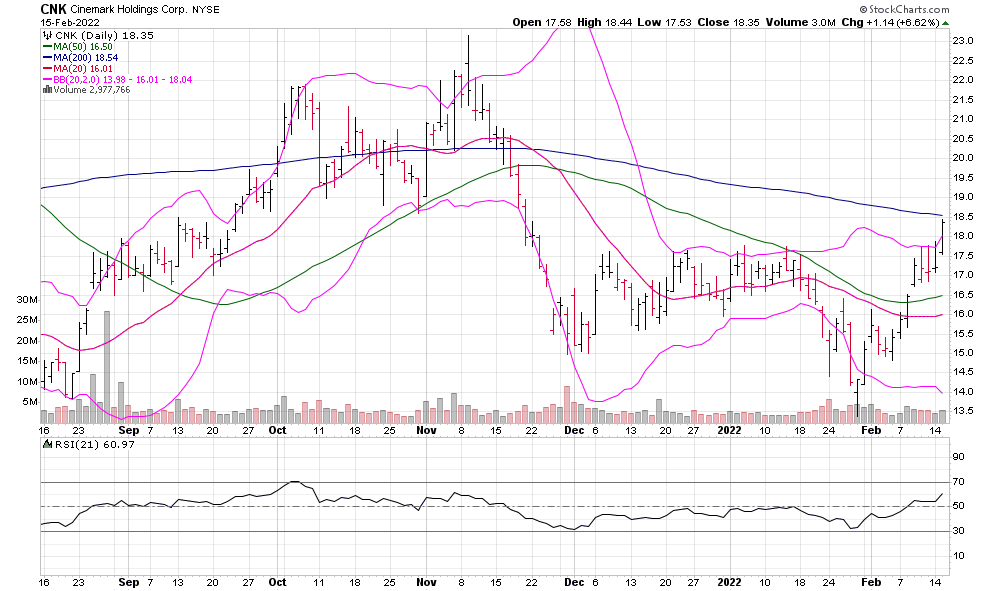 We’ve got a less risky stock for Nickel Slots, and a somewhat expensive, unhedged call for Dollar Slots.

I’m going to log off now and be sick, and I hope to see you tomorrow morning on the new Thursday show. I will be pretending to be well, but you will be able to see death in my eyes.

I’ll also have a new “Bleh” trade for you, so stay tuned.

And again, if you want more CJ, you have to go to Penny Nation. I don’t make the rules. I just enforce them.