Liz here, looking off my new back porch to see deer instead of rats! I love living in the forest.

(The major architectural feature of my prior hometown, Dundalk, MD, was a giant golden waste treatment plant shaped like a butt. The entire area, for several miles in all directions, smelled like a butt.)

This very scientific two-sided chart shows you the “before vs. after” data from the move. 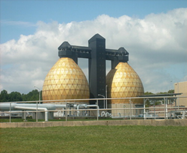 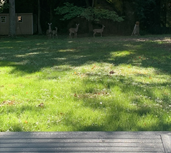 Sort of symbolic of the transition from sewage town to fairytale forest, CJ has officially declared it “Clean Energy Hunting Season” over on Money Morning LIVE. Does this mean I am now legally allowed to make the plays we recommend here? SADLY, IT DOES NOT.

If you’re anyone else besides me, you just picked up 100% this morning on Tom’s XLY trade, so congratulations… I guess.

I know, I know, I live in a magical forest. I shouldn’t be bitter.

If you, unlike me, have your Clean Energy Hunting License, CJ wants you to take a look at Bloom Energy Corp (NYSE: BE) this afternoon.

He says, “I’ll be frank. Bloom Energy has never really blown my hair back, as the company’s primary growth was obtained through acquisitions while most in the sector were innovating, but as I always say… the data and charts don’t lie, and right now they are telling me that BE shares are set to pop.”

He also sees that “pop” (so, rifle, I guess, not bow hunting) bagging you 85% over the next month.

Here’s how to get it…

I grew up in Michigan surrounded by some very intense farming neighbors, one of whom once invited us to a “chicken killing party” where the chickens were decapitated assembly-line style, much like the French Revolution.

We also had some friends who used to skin and gut deer in their garage, as a result of which the mailman would leave the mail at the bottom of the yard, like an offering to terrifying gods, and flee.

I’m not SAYING that any of this rubbed off on me, or that I am a gleeful, bloodthirsty maniac, but I will say that today’s hunting season theme struck some primal chords.

We’ve been making out like bandits in the “dirty energy” sector, with a couple of 100% gains closed out recently in USO and OXY. (Congratulations, again, if you are NOT ME.) But according to CJ, it’s time to put some dollars back into the clean side of the equation.

“Last week on Money Morning LIVE I declared that Hunting Season on the Clean Energy sector had opened,” he said. “This week, we’re seeing follow-through on that declaration, as the alternative energy sector is coming back to life, including the lesser-played names.”

The ongoing oil and gas shortage – oh, by the way, you just made 50% on a natural gas player yesterday, so congratulations AGAIN – triggered by supply chain disruptions and blackouts worldwide – is driving our standard energy names up, but alternative energy is getting some reflected glow-up too.

Among the energy stocks in the Russell 3000, two clean energy names (CLNE and REGI) are largely expected to rise 50% to 80% over the next 12 months, per analyst estimates.

According to Henning Gloystein, who sounds totally fake but is, in fact, a director of Energy, Climate, and Resources at Eurasia Group in London (which, actually, also sounds fake, so never mind)…

“This continued risk of supply disruptions and high prices for fossil fuels – which drive up electricity costs – are a signal to countries that it’s time to invest in clean and domestic energy resources. Politicians from Beijing to Brussels are aware of this. As a result, the current gas and coal supply crisis will accelerate, not slow, the green energy transition.”

CJ, who’s definitely not fake, feels the same way, which gives me more confidence.
“Give the Alternative Energy sector its props here, this rising tide is moving all of the boats in the harbor, including Bloom,” he said. “But I love the short-term technicals on BE stock.”

Whenever I hear “I love the technicals” from CJ, my heart immediately cries out “SERIAL KILLER CHART.”

I asked CJ to send me one of his well-known charts peppered with ominously spidery handwriting, and he made one (or so he said), but left it out of his analysis entirely.

Then he sent it, but to the wrong people in the wrong message thread. (Sorry, Elizabeth and Andrea!)

When I finally got it, though (feeling as though I’d bagged some type of rare beast myself), it had enough “Son of Sam” handwriting on it to be well worth the wait.

And here is the analysis of all that psycho writing. (I’ll let CJ have the floor here.)

As always, I’ve got my eyes on the 50-day moving average… The trend that is.

Bloom Energy’s 50-day is literally in the bullish transition phase. This pattern is bullish for the stock’s 4-6 week period and I’m targeting a move to $25 as a result.

Sure, Monday’s trade took the stock lower, but that move was written on the wall.

Just last month BE shares hit resistance at this “round number.” Yes, Old School options traders will know what I mean by “round number” when I talk about $2.50 strikes, trust me.

That short-term resistance led to a drop to, or near, the $20 level, which will act as the next launching pad for BE shares to rally towards a $24 target.

That number doesn’t come from thin air. It’s the price that my options model is targeting for a short-term overbought target, different from an overbought RSI signal.

Bag It And Tag It

Dollar Slots? Go for a quick 85% return using the December $21 calls. (CJ’s initial target price was $2.25, but as of press time they had already started to move – dang, these guys just keep right on being right. So I’m shifting it to $3.)

CJ says, “While I’ve calculated the target return on the option based on a fast move to $25, use the price of the underlying shares and its target of $25 to manage the option position regardless of its return.”

I’d write more, but I have to go pick up my kid from school and have a long, tearful conversation about Cruella de Vil and why you aren’t supposed to make coats out of dogs.

Back tomorrow with an all-new play from Garrett, and again, congratulations on all the money you just made that, sadly, I could only watch from afar.

I may just retreat to my garage and skin something. At least I’m well out in the country now.