I’ll let you draw your own conclusions about what that means, but I sent my husband out to the store with a really long list, and then made him go back again to return the port wine cheese because I realized I couldn’t have it.

I’m also rather sick today (you can draw your own conclusions about that, too), so today’s issue may be on the short side. There are just a few SUPER IMPORTANT things to cover (I say with my mouth full of liverwurst and gummy worms, sorry if that is indistinct).

First of all, IT’S THIRD THURSDAY. That’s not a thing, but it should be. Tomorrow is Third Friday and at noon, we will get the final results of Options NASCAR.

I’ll be on Money Morning LIVE on Monday to talk you through all the money you made, and dispense prizes. Quite possibly, these prizes will be alcohol. I have a lot of bottles of wine on top of my fridge that I am now not allowed to drink – I’ll let you draw your own conclusions about that.

As of today, the remainder of CJ’s TTD puts are up a staggering 308% — but there’s more math to do before we determine the actual winner of this race…

I also apologize if you missed Garrett’s weed play yesterday – we had a weird email snafu and a lot of folks didn’t get it. This is worth a read – especially since we’re entering a period of higher volatility and price discovery right now (a trader’s market). That means Garrett (Mr. Momentum) is the #1 guy you want to talk to right now.

Today, we have a bona fide pyramid scheme from 8-Baller – a.k.a. an MLM company that somehow made it onto the NASDAQ via a SPAC, and is now, in 8-Baller’s opinion, buy and hold. Say what?

He’s also got some options for you on ASAN, if you want a shorter-term (and possibly less insane) play…

So I’ll just jump right into this ridiculousness – the stock 8-Baller’s got his eye on is Betterware de Mexico SAB de CV (NASDAQ: BWMX). Actually, as MLMs go, it’s more like Norwex than LuLaRoe – instead of cheap leggings, they hook you into a web to sell your friends home-related products.

BWMX is quite insistent that they are not a pyramid scheme, because there are only two tiers of “distributors,” rather than an endless top-heavy pyramid. It’s a small pyramid. They made this diagram so you will believe them. 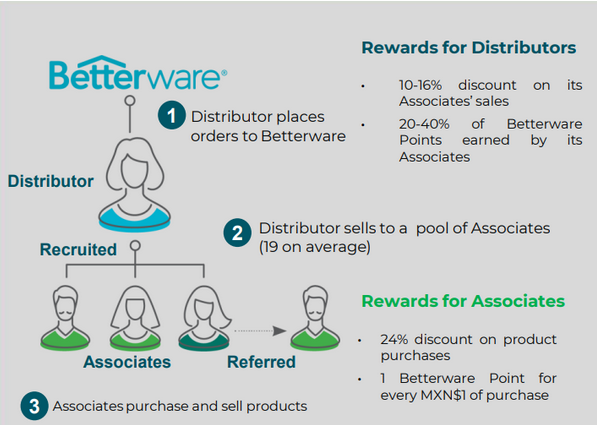 Regardless, in 2020 (the year where everything turned upside down) Betterware merged with a SPAC called DD3 Acquisition and listed directly on the NASDAQ. Since then, its share price has more than doubled, though (as with all stay-at-home and order-things-online stocks) there was a bit of a pandemic peak. (IT ALMOST LOOKS LIKE…A PYRAMID.) 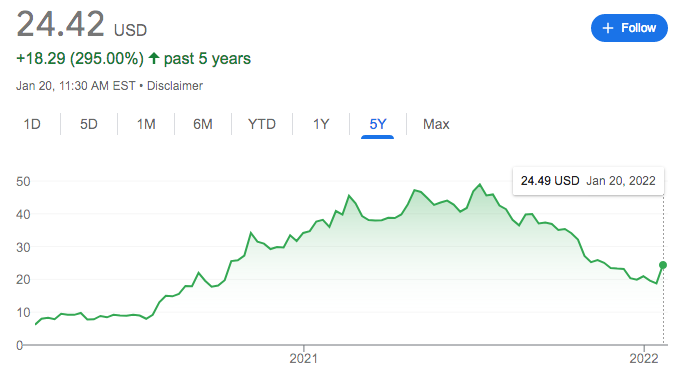 As you can tell, I dislike this company on principle — I have been burned by too many friends trying to sell me Jamberry nails. Perhaps most maddening (for me) is the fact that this cockamamie business model actually translates into real fundamental gains. Again, from their investor presentation: 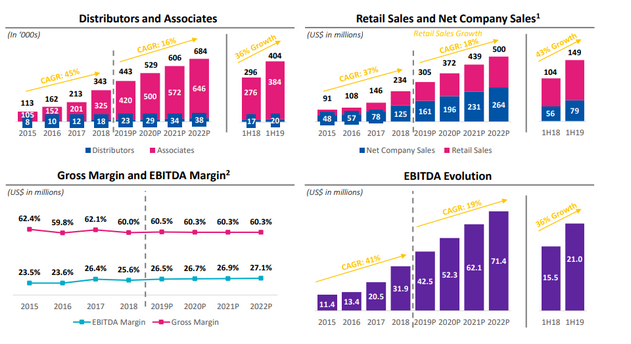 Bite me, BWMX. You sound like an off-brand trick bicycle. 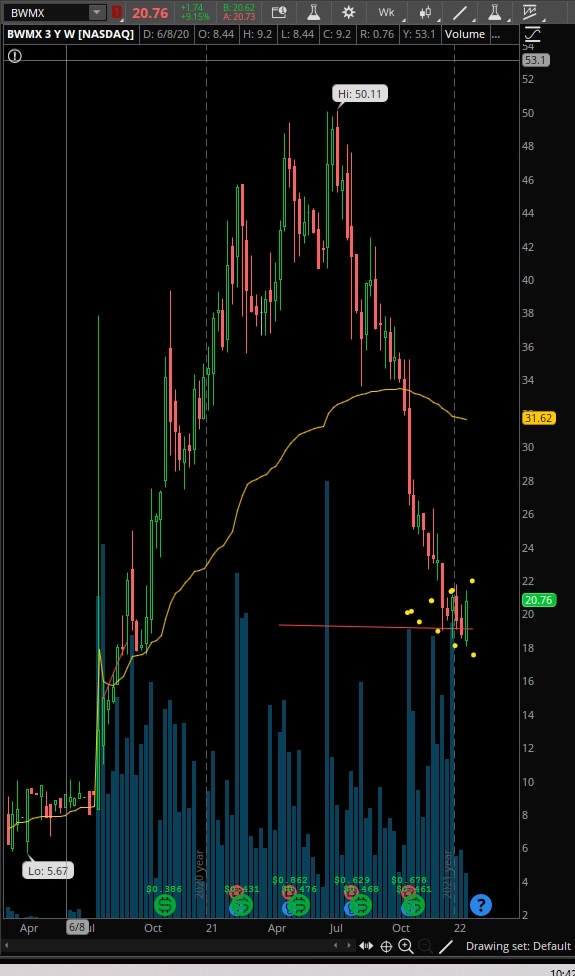 8-Ball is not burdened with my irrational hatred. He’s most excited about the deal BWMX just inked: they bought U.S. and Mexican cosmetics company Jafra, which will add $0.48 per share to their GAAP EPS (20% accretion).

“I believe this number is before synergies of $5-10mm. Let’s call it $219mm of EBITDA at the synergy midpoint.

8-Baller uses a lot of exclamation points, It is part of his charm.

“This is a thinly traded long-termer,” he said. “I would buy and hold.”

8-Baller first messaged me about this stock yesterday, while I was writing Garrett’s weed article, and since he mentioned it, it’s up 28%. “In a weak market, too,” he crowed. So the implication is, you should get in now.

If you like being guilted by your “friends” into going to “cleaning parties” where you play dumb online games and end up with organic soap that doesn’t work, and then feel obligated to guilt MORE friends into buying soap from you so you can get rid of it…here’s what to do.

As a bonus, because I’m kind – I’ll also throw in the quick February call spread he gave me on Asana Inc (NYSE: ASAN).

“Asana’s CEO, Dustin Moskovitz, just bought $97.2M in common stock,” he said. “Put on a call spread. You can also buy the stock with a $52 stop, and if you get stopped, doesn’t mean you can’t re-enter. Work the trade.”

I’ll be back tomorrow with a brand-new Tom trade on Money Calendar Friday – plus, of course, a whole spate of Options NASCAR contest exits….

I’m off to eat some pears and liverwurst, see you later. Also, go watch Kenny at 2pm.