Liz here, making people supremely uncomfortable. (Basically, I’m the human version of this hacker email: “We know what you did last night and we have video. Please to send us $50,000 in Bitcoin at this link, or we will share with your family.”)

I want to talk about your vices, and obviously, about a fat 8% dividend and a 70% options win – but I’ll tell on myself first. I’m, well, addicted is a strong word, but since buying my house, I’ve become chemically dependent on Facebook Marketplace.

Seriously, new furniture is that expensive. (Though getting a day’s pay before 10am at Kenny’s live earnings event tomorrow will help.) 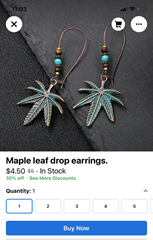 I’m concerned that I’m escalating beyond furniture at this point, though. Last night I found myself debating whether to buy these “maple leaf” earrings but I WAS able to stop myself. (Editor’s Note from Andrea: These are definitely not maple leaves; don’t ask how I know.)

So, definitely not an addiction, then.

Garrett’s got a brand-new play for you today in Altria Group Inc
(NYSE: MO) and it fans out into the “vice” space in so many exquisite ways. If you smoke, drink, or like “maple leaves” or just plain like money, I am, sadly, here to enable you.

But also to talk about it, because that’s what friends do, right?

MO’s Pullback is Straight Out of the “Tobacco Battle Book”

MO is, obviously, short for Marlboro, the big cigarette brand owned by Altria. However, when I think about it, I inevitably think of my brother Forrest, who is now the head of a massive division at Google (you can Google it).

Forrest once fell off a tall bar stool – with a loud crash – because he drew a monster called the “MO” that scared him so badly.

(To be fair, this was back in the days when we were both still reading the “Butter Battle Book.” But – as the hacker emails say – “I will always know what you did.”)

MO, the company that is, and their partner Philip Morris (PM) have both pulled back recently thanks to a salvo in the Tobacco Battle, a patent war over a heated tobacco device.

Covid has increased the rate of stress-smoking around the world, but (probably because we’re all stuck indoors now) the demand for smoking alternatives has skyrocketed. (Some analysts even think the U.S. and the U.K. could be entirely rid of traditional cigarettes by 2050). Vapes, oral nicotine, and heated tobacco are the smokeless wave of the future.

Unfortunately for MO and PM, their golden child – the IQOS, the only American patented heated tobacco device to be approved by the FDA – just got snatched away by the International Trade Commission.

Last week, the ITC ruled that MO’s heated tobacco sticks violated a number of pre-existing patents held by rival British American Tobacco, and they’re required to stop importing and selling the devices within the next 60 days.

Garrett thinks the whole scenario is a bit ridiculous. “Big overreaction to the import rules last week,” he huffed.

This whole discussion obviously touched a nerve, because he then went on a wild, somewhat unhinged tangent in Slack:

“We have 450 things wrong going on in the nation — and California is banning leaf blowers? You can smoke pot on the street corner, but you have to smoke cigarettes under a cardboard box?! Honestly, can we just stop giving a crap about cigarettes right now? Like half of people who drink smoke cigarettes.”

I feel that somewhere in there is a clue to Garrett’s pet vice, but I just saw a really cute lamp on Marketplace and got distracted.

In Garrett’s view, MO fell off the bar stool prematurely and is going to hop back on pretty quick. Here’s why (and how to make the money).

Seeing the writing on the wall pretty clearly, MO’s already outlined a “Moving Beyond Smoking” mission. (Notice how cleverly they didn’t say “quitting.”) They bought stakes of 35% of JUUL Labs, 10% of Anheuser-Busch, and, most interesting to Garrett, 45% of Canadian cannabis company Cronos Group (CRON).

Hey! That means those really ARE maple leaves, I guess. (Andrea again here: They are not.)

Altria sales increased 9% in Q2, so clearly, the “beyond” part has been working. And analysts expect an earnings beat on Oct. 28 (again, a very lucrative earnings season is getting ready to kick off, so please, please go to Kenny’s event tomorrow morning). 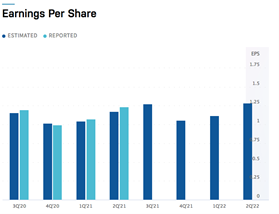 The other thing that excites Garrett about MO is the insanely high dividend.

“It’s 7.9% just now, and it was just raised,” he said. This is one of those stocks it just makes sense to own long-term – but there’s also a short-term pop-up play to be had as MO floats back up around earnings.

And Nickel Slots is one of those sneaky, win-win situations: Sell a put (betting that the stock will go up) and pocket the premium. If you bet wrong, the worst that can happen to you is that you paid a steep discount on a fat dividend-payer, but it’s still important to know your risks before selling any option “naked.”

Here’s how Garrett describes the trade:

“You can sell to open December puts and dare the market to continue to sell off. If you keep the premium on the $47.50 put, that averages out to 3.4% over 66 days, which isn’t bad at all.

“Then, if the stock actually does fall under $47.50 and you take delivery, you’re going to end up with possession of a stock with an incredible dividend-hiking history paying you above 8% a year.”

Being addicted to bargains is definitely a thing. Not that I have that particular sickness.

As long as we’re talking vices, greed is one – and just so you know, your NKE calls from last week are up 73%. These are my own recommendation, so you’re welcome.

I’d say leave both of these plays to run to 100%, but if you want to cash out now, that’s of course up to you. You can stop any time you want to.

I’ve obviously already set my child up for codependency, by the way. Last night he told me he wanted to marry Cinderella. I asked why, and he said, “So she can take care of me.”

I’ll be back tomorrow with an AK play for you-fresh off last week’s pair of 100% oil wins.