Liz here, never watching another shark movie! My first husband (God rest his soul) owned every shark creature feature known to man, including such gems as “Sharktopus,” “Sand Sharks,” and “Jersey Shore Shark Attack.” After he passed away, I filed them all reverently in a black DVD folder and have not thought about sharks since then. 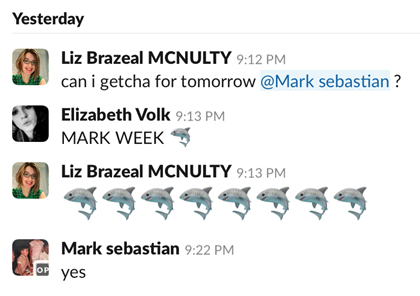 And – even better – when he sent me the trade this morning, guess what the stock was? SYF.

If that doesn’t give you flashbacks to the SYFY channel – home of all the worst shark movies on cable – you have clearly not been exposed to enough “Ghost Shark.”

This picture seems vaguely bearish to me, which is good, because Mark’s got some puts on to start your week off right.

He’s also got three free, bearish trades for you right here, when you sign up to attend his “BEAT THE BEAR MARKET” seminar….

That’s free to attend on Wednesday, so reserve your seat now.

And get your SYF puts right over here. Come on in and swim, the water’s fine.

Mark sent me over his usual three charts: big money flow, followed by some suspicious technicals.

“We’ve seen a big opening buyer of SYF puts,” he said. That would be Synchrony Financial (NYSE: SYF), a weird “provider of private label credit cards” that’s also dabbled in pet insurance, after the conclusion of a long-drawn-out fraud lawsuit that used up a lot of their money.

I looked up their Z-Score, out of curiosity, only to be told by my screener that the Altman Z-Score “does not apply to banks and insurance companies.” You learn something new every day!

Anyway, Mark sees a big put buyer who apparently has a beef with pet insurance. Feed Their Fantasy!

Mark’s own charts bear this out. “The stock does not trade very often,” he Slacked me. “It broke out higher, but might be failing here. Option vol pretty low and 10 day realized picking up.”

He wants us to piggyback on the big buyer’s puts, as follows:

I’ve got a new Nick Black pick for you tomorrow, since everyone wants crypto right now. (SYFY also routinely airs “Tales from the Crypt,” if you’re in the mood.)