Liz here, with a slightly untraditional MONEYSCORE for you!

That includes gains in just the past month of:

He’s about to raise the price on his crypto service (on Monday, I think), so if you want to get in now you still have a day or two to do that.

I’m also starting a brand-new crypto feature here on Sundays called – you guessed it – QUICK SUNDAY CRYPTO TIPS. I’ll have a couple of tips from Nick for you tomorrow (as always, for free) so make sure you check your email.

As far as your own money this week, unusually, we didn’t close out any options gains. (Your BIDU and PTON puts are both headed up, though – they’re at 8 or 9%, so keep an eye out early next week).

But you do have three double-digit stock gains on Tim Melvin’s small banks, which we would totally be taking off if not for his rules about NEVER SELLING ANYTHING EVER.

Go here to see them – and as always, to get a Supremely Unhelpful Movie Review.
Somewhere Over The Swampland

Here are Tim’s double-digit bank gains, which you can see for yourself in our portfolio.

We will probably never sell these and we will all die while Tim sits in his Florida back yard waiting to shoot alligators and never pulling the trigger.

Speaking of flops, today’s film is the worst Shirley Temple movie of all time, “The Blue Bird,” which Fox offered her as a kind of consolation prize after she lost the Dorothy role in “The Wizard of Oz.” (She had finally grown in all her adult teeth and people found it unsettling to look at her.) 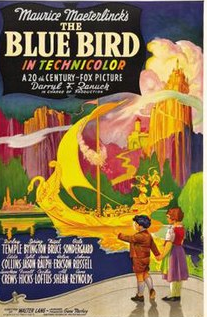 This box office flop – which was released exactly one year after “Wizard,” in 1940 — even included a black and white into color sequence. Other than that, the only remarkable thing about this film is the following chilling tidbit:

“Four-year-old Caryll Ann Ekelund (credited as Caryll N. Ekelund) appears as an unborn child in the film. On Halloween 1939, Ekelund’s costume caught fire from a lit jack-o-lantern. She died from her burns several days later and was buried in her costume from the film.”

Oh, I lied. Actually, one other bizarre thing happened….

As part of the lead-up to the film, Shirley was performing her “Bluebird” role in a live radio dramatization of the story. They apparently let people in off the street to listen to this, and – in the middle of the LIVE broadcast – a crazy lady got up and pointed a gun at Shirley Temple, claiming that her daughter had died on the same day Shirley was born and that Shirley had stolen the baby’s soul. The lady was fortunately arrested without incident.

Have a safe and not at all disturbing weekend – I’ll see you tomorrow with NICK’S QUICK CRYPTO TIPS.