If Tom Gentile is Ghostbusters, Andrew Keene is James Bond. He’s an international man of mystery who makes periodic appearances at our office after exotic getaways in Thailand, Bali, Spain, and who knows where else. He’s always showing us pictures of his fancy cars. (Of course, he became a millionaire after his first year of trading, so that helps.)

I kid you not, I just looked him up on a site called “Millionaire Interviews” and he was interview 007. Suspicions confirmed.

AK’s trading strategies (the same ones that made him a millionaire) are up for grabs at the 1450 Club, and he delivers daily premarket ideas for free at Profit Pregame.

He also has an insanely cute dog, which may or may not be a live teddy bear: 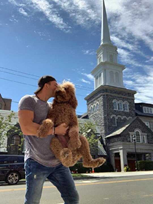 At the time of this writing, AK was stranded in the Hamptons (likely on some type of secret mission) and had lost power. His morning live trading rooms were postponed as a result, but he did manage to send me a quick trade setup by email.

If you’re a flex trader – someone who is more interested in quick results than in long-term processes – you’ll like AK’s style a lot.

He flirts with day trading (and probably with Xenia Onatopp). His S.C.A.N. system pinpoints and confirms big institutional money moves, “follows the money,” and gets traders in and out VERY quickly.

And he just spotted a big money move in QuantumScape (NYSE: QS) that could make you 300% in a matter of days.

Get that right here for free.

A Lot of Big Money Moves In And Out of QS – And Right Now, It’s In

I know we’ve been talking a lot about clean energy in this space recently – particularly electric vehicle batteries – but that’s where the money keeps cropping up.

QuantumScape (NYSE: QS) is sort of aptly named, because (in quantum fashion) it’s several conflicting things at once. It hasn’t actually made anything yet – it’s close to the end of the process in developing a 15-minute fast-charge electric vehicle battery.

Given that it doesn’t have a real product yet, it hasn’t made any money, either. No earnings – just expenses.

However, QS is backed by the full faith and credit of Volkswagen – one of the three car behemoths that plans to go fully electric by 2030. It has a staggering 200 patents and patent applications for the “whiz kid” battery.

And it’s swimming in cash ($1.5 billion of liquidity) from VW’s deep pockets.

All that back-and forth means there’s a lot of in-and-out. Shut up, Pussy Galore.

QS – and this is key for how AK trades – is a very volatile stock. Every time it issues shares or makes an announcement, it whipsaws massively. It’s ricocheted off a low of $42 three times in the past year – hit $65 -and fallen back.

Right now it’s in the low 20s, making it a very good buy at the moment. (Analysts think the stock is trading at about a 70% discount to its true value.)

Basically, big money has trouble making up its mind about QS. Institutional investors ask themselves: “Do I want to gamble on this?” Sometimes the answer is yes. Sometimes it’s no. (It’s a lot of soul-searching. Therapy might help.)

Here’s the thing – AK’s just seen a massive move of “unusual options activity” into QS. Somebody bought a block of over 10,000 September 24 calls yesterday.

That means right now, for whatever reason, the answer is yes. Big money has decided to hop in and play.

And the stock’s already started to tilt upwards just a bit.

Unusual options activity is exactly what it sounds like. Every single day, there are millions of orders flying through the stock-market world. Most of them are not worth mentioning, but each day, there are also massive orders hitting the tape. I’m talking orders that are beyond out of the ordinary for a stock – orders with thousands upon thousands of contracts being purchased at one time.

This happens because of a harsh truth: Institutions have more edge than you do – because they have access to information we simply don’t.

AK’s S.C.A.N. system is a spy gadget in its own right. It spots unusual options activity – checks that the volume is larger than the open interest – and then “confirms the signal” with a fascinating indicator called the Ichimoku cloud. (If you’re a member of the 1450 Club, you can get very, very deep into the mechanics of all this right here.)

“QS is one of the names that works very well with Unusual Options Activity,” AK emailed me from his dark lair in the Hamptons. “I like options under $.50 with a big ATR (average true range) that could triple in value very easily.”

Because of all that volatility we talked about earlier, QS has a massive ATR – it can, and does, make huge hops in either direction.

S.C.A.N. calculates ATR over the previous 14 days (how handy!) and it uses that number to give AK a “profit target.”

And the target AK is seeing here is pretty massive.

As you know, I usually like to get you a “Nickel Slots” and a “Dollar Slots” play based on varying levels of risk-reward appetite. Because AK was out of pocket, we only have one recommendation today, and that’s calls.

You can pick up the stock, instead, if you like. No one’s stopping you. It’s cheap. But the options are really cheap as well.

You should probably just go ahead and grab the options. After all, you only live twice.

As always, you can track that trade in our open portfolio right here.

I’ve now singlehandedly gotten myself in the mood for a Bond marathon over Labor Day, so thanks for that, AK. I REALLY didn’t need to paint my new house or anything.

We’ll be taking Monday off, so I’ll see you back here next Tuesday with (if I’m not mistaken) a fresh Mark Sebastian play. (Mark’s building something pretty neat at the moment, so I’d suggest you get on the waitlist here.)

Have a great holiday weekend,