Liz here, back from the Bahamas. Do I have stories for you…

First of all, we couldn’t get away from jail. Out of 2500 people on the cruise ship, we immediately found ourselves in the hot tub with Lt. Becky, who had immense diamond-studded fingernails and just retired from a maximum security facility in Georgia. Wait till you hear what she told us about death row.

I also had a full week without Internet, which was great – especially since I’m coming back to discover a new low for the S&P coupled with wild volatility. The BLEH is strong!

It appears that Tom’s going live tomorrow with REAL Quantum Scripts signals from his basement machine – to show you how to trade this craziness going into Wednesday. All for free (and it’s hard to get him to give these signals out for free.) Sign up here.

Mark also has a brand-new short trade for you here today – in his poetic words, this is the one time when “toilet paper is s***.” How times change.

It’s going to be a great week for puts, my friends. Pick up some fresh ones right here.

We first found out that Lt. Becky worked in a jail because she was sitting in the hot tub on the top deck, complaining loudly about her son’s little girlfriend.

My husband and I sat there in the hot tub and blinked (I only had my feet in, because I’m pregnant and not allowed). I thought, “We leave jail, but jail follows us like a specter.”

Lt. Becky really wanted to talk about jail. When she was working on death row, there was an inmate there with cancer. “He was there for nine years,” she said. “They paid for all of his cancer treatments. And he went into remission. And then two days later, they called us up and scheduled his execution. He was going to die when they said so.”

The family asked for a stay of execution, and the guy laid there strapped to the table “from three to nine, while they waited to hear,” said Lt. Becky. At 9:05, they decided they weren’t going to hear anything, so they administered the injection.

“And at nine-fifteen,” said Lt. Becky, waving her diamond-studded fingernails, “the phone rang and it was the governor with the stay of execution.”

She heaved herself out of the hot tub and said “I’m going to go get me some ice cream.”

It was a great vacation.

I reluctantly returned from island paradise to discover two things about Mark.

First – Mark is predicting the VIX will hit 40 by Friday. (Basically, that’s the market’s “fear gauge,” which is at an all-time high.) This week, he’s going to look for smart ways to go long volatility – because by trading volatility itself, you can make $$ instead of getting crushed. (He’ll be doing this all week, live, in Profit Revolution, which you can join here.)

Second — he is down on consumer staples at the moment (a bit surprising after seeing the sheer amount of supplies we used on the cruise ship).

“XLP is one of the few sectors that is still up over the past 6 months, but it’s going to get liquidated,” he said. “It’s soft drinks, smokes, booze, and toilet paper.” For reference, here’s that overall sector chart. 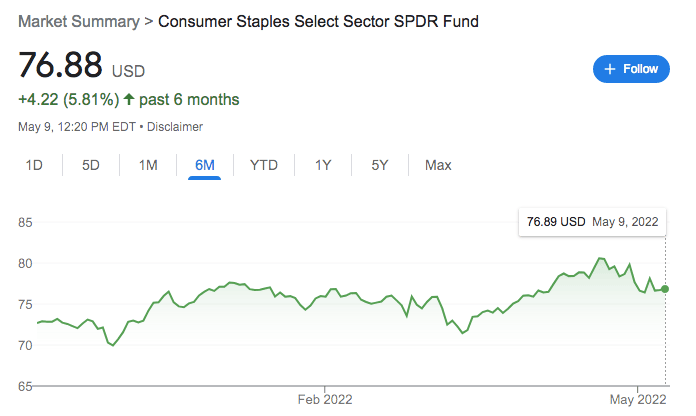 Just because I like to be contrary, I’ll observe that I’d much rather be long consumer staples in a bear market (and that does look like where we’re heading). No matter what the S&P 500 is doing, you still have to wipe your butt (I think Tim Melvin, king of infrastructure, would agree with me here).

I’m probably going to put on some XLP calls of my own (SO THERE, MARK) – but within that staples sector, he sees a shorter-term, downwards move in Procter & Gamble Co (NYSE: PG). And he does have good technical reasons for it (sigh).

“PG is sitting at the 50-day moving average,” he said. “The IV is still reasonable, and the realized volatility is getting over the implied.”

He sent me two charts, in case I wasn’t convinced.

Mark thinks a put spread in PG could, in his words, “come into play and play out big if this market falls apart.” I’m resisting the temptation to make more toilet paper puns, but I think this is no. 2 and I should really stop.

And again, just to be contrary, I’m going to go ahead and throw on those XLP calls. We’ll bake a little time in – and these aren’t even that expensive. (They’re unhedged, though, so I’ll go ahead and put them in the Dollar Slots basket.)

Of course don’t forget that Tom is handing out free Quantum Signals like candy tomorrow night (get your Golden Ticket here.) We spent way too much money in the arcade on the ship playing the “Charlie and the Chocolate Factory” game, and we still didn’t get the Golden Ticket. Your mileage may vary.

I’ll be back tomorrow with, hopefully, some profits – I’m watching about 5 puts in our portfolio that are starting to bubble nicely. In the meantime, let me leave you with this ghostly towel monkey that the Carnival people put in our stateroom, which really did scare the s*** out of me.