Liz here, dragging my child with brute force through the five circles of hell, a.k.a. the five days of “Holiday Spirit Week” at school…

Yesterday he had to dress up like a candy cane, today was “pajama day” (that, at least, was easy), and tomorrow (CURSES!!) is “Winter Character Day.”

He’s a blond kid, so I’m going to hang a sign around his neck saying “I’m Macaulay Culkin from Home Alone. Ask me to make the face.”

In addition to “Winter Character Day,” tomorrow is also CJ’s Penny Rocket event! If you have been LIVING UNDER A ROCK for the past few days, perhaps you’re not aware that CJ’s figured out a genius way to make triple digits off stocks that cost, on average, 97 cents a SHARE.

Tomorrow night at 8pm, he’ll show you exactly how he does it.

Here is your official invitation, again, if you have been living under a rock:

Today is day 2 of our Penny Party, right here in Trading Today, and CJ’s been kind enough to give us a bonus penny stock that you can play while you wait.

Well, to be strictly fair, this isn’t quite a penny stock. It’s trading a little bit above $2 right now.

But CJ’s got a way to make it into a penny play – and he likes it so much, he wishes he’d kept it for the Penny Rocket launch tomorrow.

His exact words were, “F***! I almost want to save that for the presentation!!!”

And he said “Run, sweet Liz! Run with your trade.”

He then sent me a 16-line-long paragraph consisting of the word “gogogogogogogogogogo.” (I both love and hate you, CJ. It’s hard, having so many emotions at once.)

Here it is – before he changes his mind…

CJ has had a lot on his plate lately, prepping for Penny Rocket, and it took him awhile to get me this trade this morning. In fact, we were still Slacking about it right up until press time.

I reminded him kindly about it earlier in the morning and he said, “Everybody’s pinching my pennies!”

I said, “It’s so we don’t have to pinch pennies when it comes time for end of year bonuses,” to which he responded with the little crying laughing face that’s also, coincidentally, on the front of my child’s favorite pajama shirt. (He did not wear this shirt to “Pajama Day” as it was too cold.)

ANYWAY, it is very nearly press time and this will be brief but valuable. You know, LIKE PENNY STOCKS.

I’ll give you the gist of our Slack convo verbatim:

Something is up with Alzamend Neuro Inc (NASDAQ: ALZN) and I’m liking the move for a larger pop.

This reminds me of the earlier stages of SAVA, where volume started to pick up on price. Same action, although we’re not trading this for the long game: it’s all about being in front of a wave of volume. 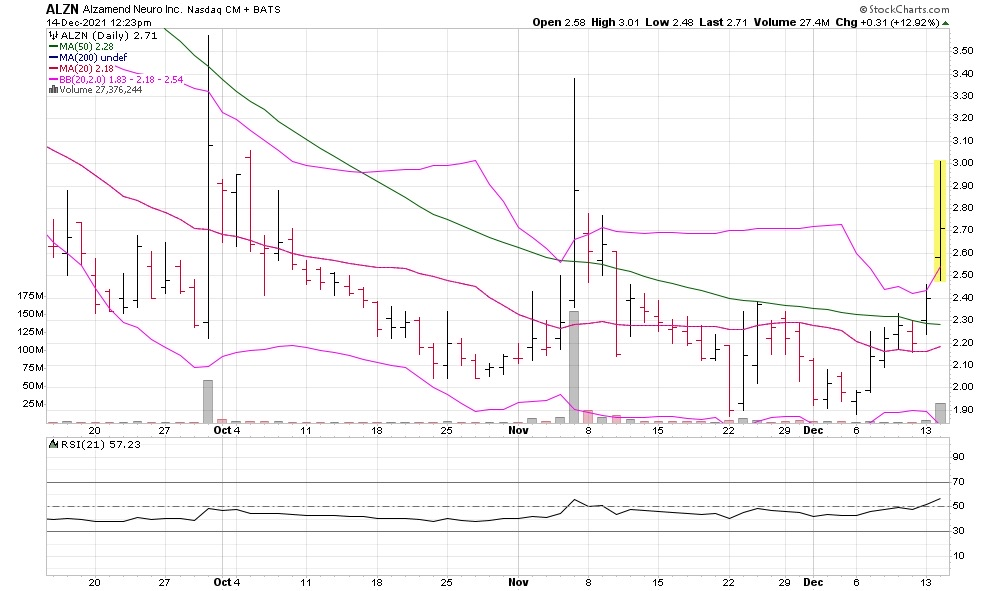 That’s the stock trade right there (we’ll call everything about this trade Penny Slots, naturally).

This is a 27% move that would net 17% on the trailer if it reversed right there.

Technically, of course, this isn’t trading under $1, so it’s a “dollar stock.” But there is little to nothing that is signaling right now in the sub-$1 price category.

But here’s the cool thing…shock:

You can turn this into a penny play with January calls.

Here’s what to do…

This was the point in the Slack conversation where CJ started to express regret that he hadn’t put this in his Penny Rocket plans for tomorrow.

“Seriously, I really like this trade as a short-term,” he said. “Note the pop in volume.”

I was already through the door, leaving a Bugs-Bunny-shaped hole as I raced to get this to press before he changed his mind.

That said – the deadline is upon me.

Don’t forget to sign up for Penny Rockets – you’ve seen the bonus trade, but you’ll get a LOT more tomorrow live at 8pm.

I’ll update you on whether they kick my child out of school for his half-ass Home Alone costume.