Liz here, sick as a dog. I faked good health and humor on the show yesterday (thank you for watching). Grape-sized baby is kicking my ass. I would not stand a chance in combat with a full-sized human.

Yesterday we had Tim Melvin —Garrett’s father-in-law — on as a special guest thanks to his obscene 66% stock win (he wasn’t thrilled with me for preemptively taking off half, but oh well, deal with it, Tim.)

Speaking of Garrett, make sure you’re signed up for the World’s Biggest Trade this week – keep it all in the family!

And today I’ve got Tim back here with a brand-new bank stock that, according to him, could 10x by next year.

(Oh, and I’ll also give you a quick update on EARNINGS SUPERBOWL, too – go here to grab that.)

Here’s A Quick SUPERBOWL Update For Ya…

If you recall, we have three trades in this race right now: my CMCSA puts, CJ’s NIO puts, and Tom’s INTU call spread.

Here are the puts – I’m ahead by a nose!

Our tracking software for combined positions leaves a bit to be desired, so I reached out to Morgan, the Eye of Sauron, for an up-to-the-minute update on Tom’s INTU spread. Here’s what he said: 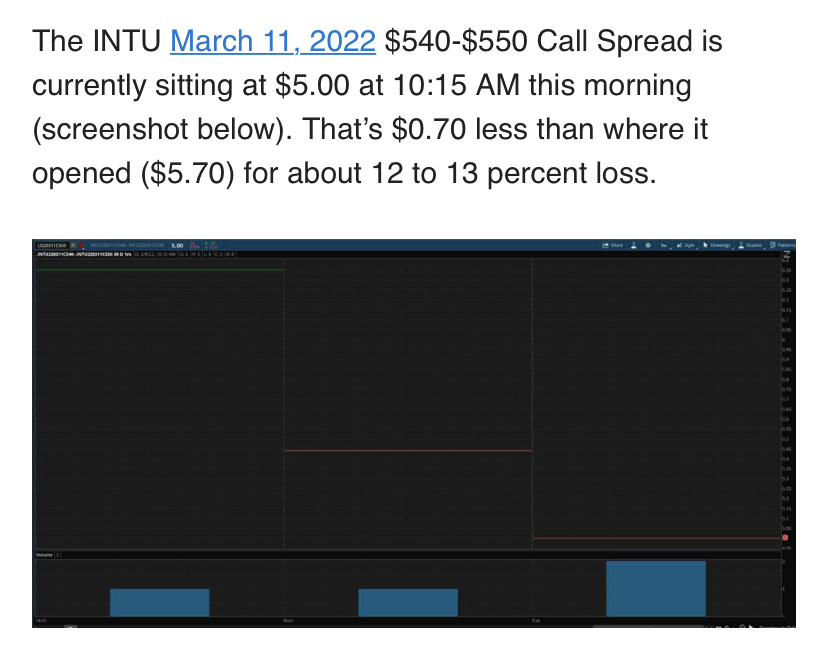 Do with that information what you will! We should have at least one more Super Bowl trade coming this week from CJ, so stay tuned! Here are the rules, if you missed them.

And now, here’s Tim’s new play – he sent me a great piece of analysis, so I’ll just shut up and let him roll with it.

People frequently tell me how boring and pedestrian bank stocks are in this new high-tech world we all live in today.

They tell me that you have to own the exciting stuff to mark money. Banking is boring. My grandmother owns a bunch of bank stocks.

At least that’s good news. That means Granny has a ton of money stashed.

Buying banks stocks the right way can earn you returns that would make the flashiest hedge fund manager blush with envy.

I spend an extraordinary amount of time crunching numbers. I test every investing idea I can come up with, and anything I hear that sounds good. Unfortunately, most of them don’t work very well when we crunch the numbers.

Many of them work for a short period of time and then begin to fail.

Some only work under certain conditions.

A few emerge from the rubble capable of producing long-lasting high returns.

Even in the great financial crisis, the high yield low PE bank stock strategy went down less than the S&P 500 and recovered faster.

If you have put that same dollar in the high yield bank stock strategy, you would have $7897.70 for every $100 invested.

If that’s boring, then bore me some more.

Peoples Bancorp Inc. (NASDAQ: PEBO) is one of those boring banks that I think can deliver exciting profits. Based in Marietta, Ohio, this bank has $7.1 billion in total assets and 135 locations, including 119 full-service bank branches in Ohio, West Virginia, Kentucky, Virginia, Washington D.C., and Maryland. 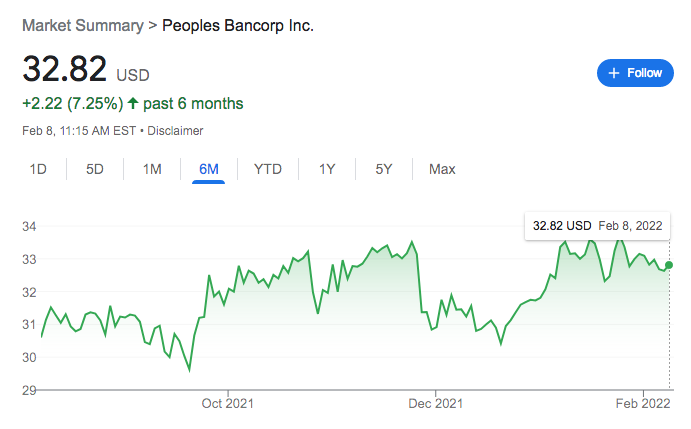 The bank loan portfolio is pretty diversified with business lending; single-family homes and commercial real estate are the largest loan classifications on the books. Moreover, they are good at underwriting their lending activities as non-performing assets at People’s Bancorp are just .70% of total assets.

The bank has plenty of capital on hand and the equity to assets ratio, a measuring of equity levels used to evaluate banks, is above the national average.

Peoples Bancorp can handle just about anything the economy and the markets can throw at it. The bank first opened its doors back in 1902, so they have thrived and prospered through two world wars, countless conflicts, depression and recessions, and several pandemics as well.

The bank should see a significant earnings increase this year, as it will be the first full year that reflects last year’s acquisition of Premier Financial Bancorp next year. That deal added $2.1 billion in total assets, $1.2 billion in total loans, and $1.7 billion in total deposits to the Peoples Bancorp Balance sheet.

There were substantial cost-cutting opportunities in combining the banks, and a much greater percentage of the cash from the acquired loans will flow to the bottom line of People.

The bank also piled up a lot of cash in 2021 as cash on hand went from around $150 million to about $420 billion. The banks should be able to get that money invested at better rates as the fed will be raising rates in 2022.

As rates rise, net interest margins should move up as well.

Add it all up, and People’s Bancorp should see a year-over-year earnings increase of about 20% in 2022.

You wouldn’t know it by the stock’s valuation. The shares are trading at 11 times, trailing 12 months’ earnings, and less than ten times what I think the bank can earn next year.

PEBO is trading a massive discount to the broader market and will grow at a much faster rate than most companies.

Unlike tech stocks that see their shares get hammered when there is talk of inflation and rising rates, rising rates is actually fantastic news for People’s Bancorp and its shareholders.

Shares of Peoples Bancorp are currently yielding about 4.4%, which is well above Treasury bond yields, municipal bond payouts, and most corporate bonds interest rates today. You would have to buy junk bonds to get a higher cash return on your cash.

Shares of a 120-year-old bank with a strong balance sheet high expected earnings growth seem like a better choice for income investors.

PEBO also has a fantastic history of raising the dividend. Over the last decade, they have increased the payout by about 15% annually.

The dividend was last increased back in September o2021, and I expect to see another increase this year.

Insiders have a vested interest in the bank’s success as most of the officers and directors have substantial holdings of Peoples Bancorp shares.

Four officers or directors have made add-on purchases in the open market in the six months.

It sounds like a way to make a lot of money to me, and I always find that pretty exciting.

Liz here again, taking over quickly to remind you to go sign up for Garrett’s World’s Biggest Trade!

I’ll be back tomorrow with a new trade from CJ (congratulations on your 50% win this morning, by the way!) Hopefully by then I’ll be feeling better and able to project more personality than a potato.