Liz here, back for another plate! (I do miss Golden Corral.)

Congratulations on a nice fat 180% win this morning to start your Friday – oh, and by the way, Tom’s XLY calls from last week are up 30%, too (thanks, Janet Yellen!)

This is starting to look like the marshmallow fondue table in the buffet dessert section. You can’t help yourself and just have to keep going back. (Told you I was old.)

Tom’s got a new money-doubling play on a big, liquid ETF, as per usual for Money Calendar Friday. He also sent me a really cool piece of analysis that gets into how the Money Calendar spotted today’s pattern, plus a screenshot from the tool itself (I’m excited, I don’t always get access to this).

As far as “breaking the internet,” Tom has also singlehandedly taken down Facebook for a six-hour stretch. (Oh sorry, that was Frances the whistleblower.)

What Tom’s actually doing is “trading the whole market.” This has always struck me as akin to “breaking the Internet” (who could actually accomplish such a mammoth task, except Wreck-it Ralph?) 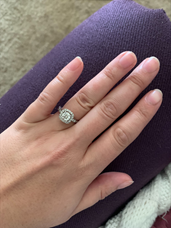 “Earnings season is upon us and yesterday was a good day for stocks reporting,” Tom says. “Couple that news with the report on weekly jobless claims coming in at 293,000 which was under the expected 318,000 and one can understand why the markets performed so bullishly today.”

The way to bet on the whole entire direction of the whole entire market, is obviously, to buy or sell an ETF that swallows up the massive market inside itself – like the SPDR Dow Jones Industrial Average ETF Trust (NYSEARCA: DIA), also known as the “Diamonds.”

Speaking of diamonds, I really wanted to show you my ring. He did well, didn’t he? (Editor’s note from Andrea: Yes, he did!)

ANYWAY, here’s a money-doubling Dollar Slots play on DIA – plus a Nickel Slots with an even higher probability of profit.

What the Money Calendar (And Probably Marilyn Monroe) Sees in Diamonds

When Tom sends me a good piece of analysis, I try to sit back and shut up (though I don’t always succeed). I’ll just take my third plate of sushi and roast beef and marshmallow fondue back to the table and sit down.

When I bring up my Money Calendar tool, which looks at a 10-year historical tendency of a stock or ETF, locking into those that have successfully moved higher (or lower) 9 or 10 of the past 9-10 years, I see an opportunity in the SPDR Dow Jones Industrial Average ETF Trust (NYSEARCA: DIA).

Here’s Liz: This is the secret Money Calendar screenshot that we don’t always get to see!

Liz again: I was particularly geeking out about the Power Meter, because again, I don’t always get to see this data. The only one who has access to it on the daily is Rachelle, Tom’s right-hand woman, who’s also my Maid of Honor. She now has access to both my seating charts AND Tom’s Money Calendar charts. UNFAIR.

Tom, ever the quintessential Depth Trader, then sent over a couple of bar charts and moving averages that added even more color (clarity, and cut) to the picture. 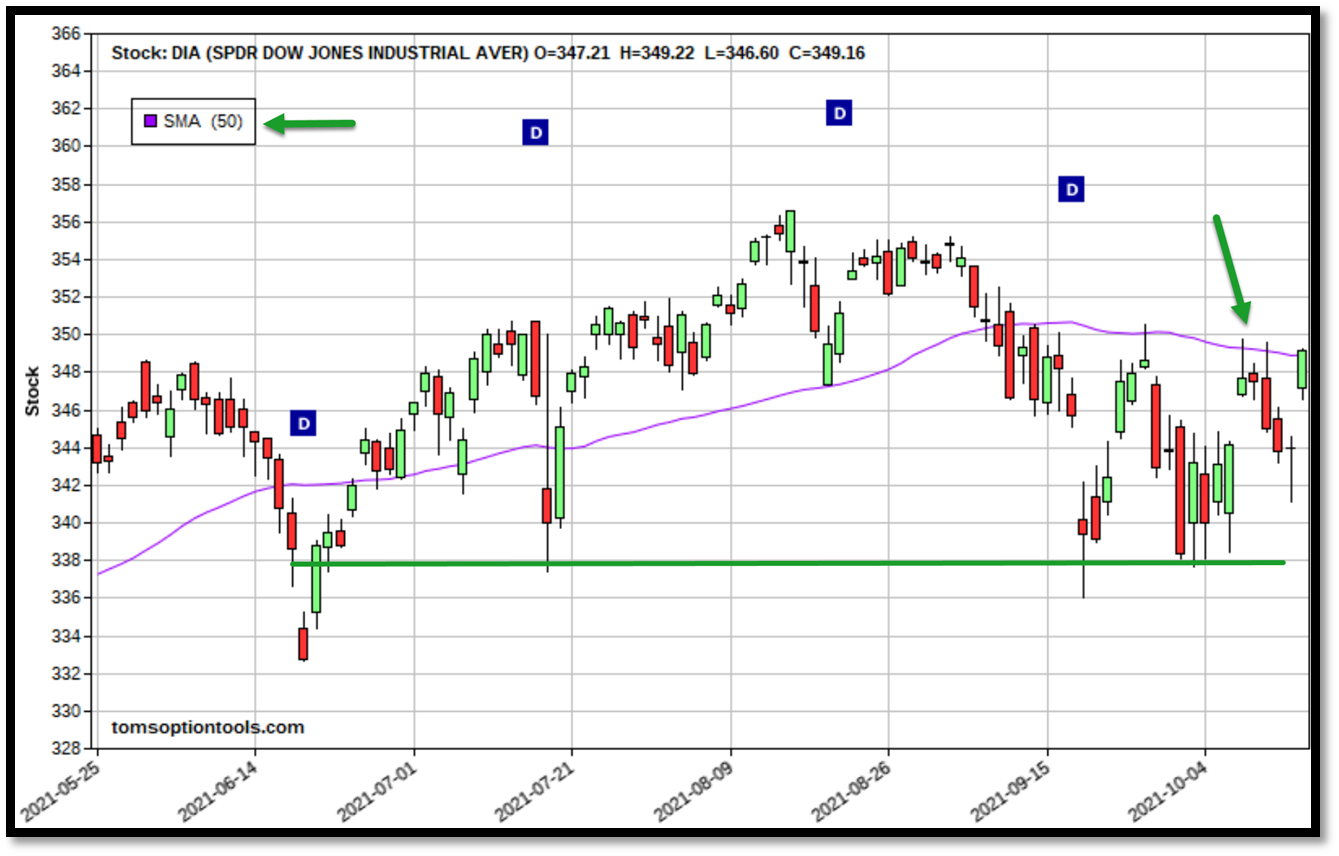 I see a support at $338 on the chart of DIA. I highlighted that support with a solid, green horizontal line.

I also like the fact the DIA closed above the 50-day Simple Moving Average. That is bullish to me and now I want to see more follow-through to the upside. (This last point is what I’m focusing on for the two option trades I’m about to give you.)

I want you all to take a look at the bar chart image of the last 10-years’ Profit and Loss (P/L) for the DIA, as it shows the last two years hit an over 10+ point move over the range of days. 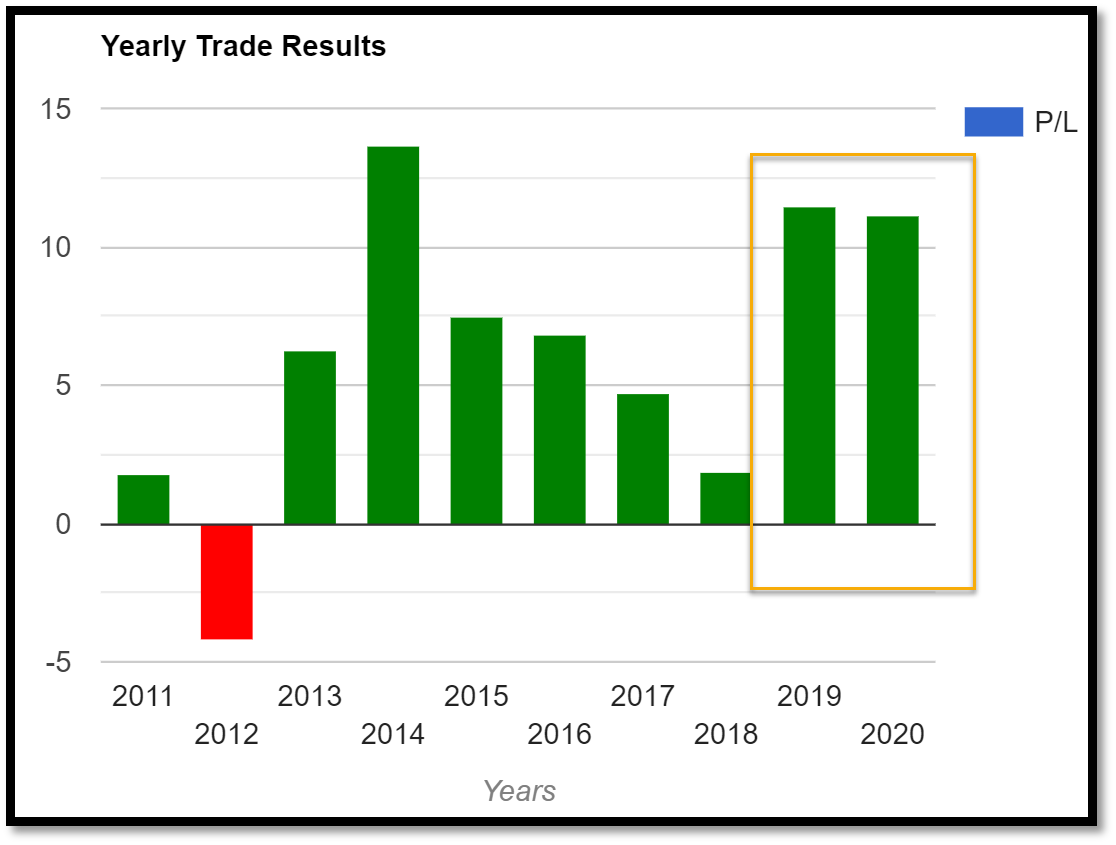 All that adds up to a couple of diamond-quality options picks – a put credit spread for Nickel Slots, and a Dollar Slots straight call.

Liz: I love Tom so much. I never have to make up my own recommendations on Friday.

Tom, after singlehandedly fixing Facebook’s backbone outage, dove right in with a Put Credit Spread for Nickel Slots. As you recall, this is the one where you sell a put to collect the premium, and buy one to hedge potential losses.

Your potential reward is capped, but – according to Tom – it’s more than enough:

“This opportunity may show less profit potential on a per contract basis, but has a higher probability of profit, because you don’t need the ETF to move higher necessarily,” he says. “You just need it to stay above a certain price and be above that certain price at expiration for max profitability.”

He then went on:

“The reason I chose the $338/$387 spread combo is because I like to sell the strike of the spread based on where I don’t see the stock or ETF going or where I don’t think it will go between now and expiration.”

Here’s the screenshot from Tom’s tools:

And here’s what to do:

As far as Dollar Slots, this (slightly expensive) one is your potential 100% winner.
Tom says, “This option has the opportunity to double in value if the ETF makes a bit over a 10-point move again this year.“
He then elaborates:

“It even has a chance to be at a double if you factor in some Time Value / Extrinsic Value in its option price with even just a $10 price move.”

Note from Liz – By press time, DIA had already started to climb, and had, in fact, hit $350. Good eye, Tom! We‘re now shooting for $351 or higher! I therefore updated the official limit to $6.00, but the chain of reasoning still stands.

Golden Corral still stands, too, but the “Closed for Covid! We’ll be back later!” sign is sadly, still out front.

I’ll be back on Monday with a new trade from Mark Sebastian, who has finally returned from his lengthy Columbus Day/anniversary trip. I’m thinking “Mark Mondays” will be, as the Internet says, “a thing.”

Hang loose and have a great weekend!
Liz